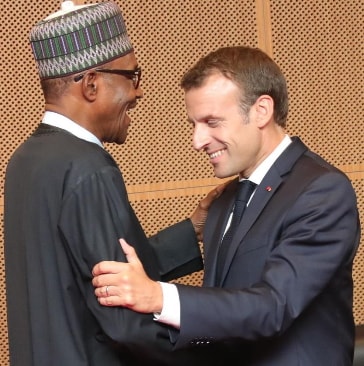 I have always been a close admirer of Emmanuel Macron, the President of the French Republic and France youngest president (he became president at the age of 39). A man that has become a bundle of hope for youths all over the world that are desirous of blazing the trail in their country’s political fiefdom. I was further thrilled to receive an invitation to attend an interactive session with this highly cerebral leader at the Eko Hotel and Suites in Victoria Island on the 4th of July 2018.

As a youth columnist, I have for sometimes referred to his disruptive entry into the French politics and some of his daunting reforms. It will be of great interest to note that Macron was just six years old when President Muhammadu Buhari was the Head of States of Nigeria in 1983! Fast forwarding to 2018, this same Macron is now the President of one of Europe greatest powerhouse, and Buhari is still the President of Nigeria! Apart from the yawning age gap between this two leaders, I have come to notice that there is also an unredeemable gap in their perspectives and thought patterns! An hour of interaction at the Eko Hotel with this ‘immaculate’ leader almost brought me close to tears as I suddenly realize that it might take donkey years for Africa to get disruptive leaders like Macron except for divine shift or interventions.

A nation can never be more than the predominant mindset of her leader. A nation will always follow the trajectory of the leader’s thought pattern. Marianne Williamson once said, “You must learn a new way to think before you can master a new way to be.” I wonder how a French President can be thinking so much about strategic interventions in Nigeria and Africa while African leaders are wallowing in excuses and victim’s mentality. It is sympathetic hearing Macron talk too well about wealth creation in Africa whereas an African President is thinking of sharing looted funds among the poor! Macron believes Nigeria has what it takes to thrive but it is poignant to see our own leaders putting us on ‘survival mode’ by thinking that sharing looted fund to the poor is the new way to go. It is appalling to know that when our leaders are thinking of building ranches for cows, someone else is thinking of building an ecosystem for African entrepreneurs through the Digital Africa Initiative (DAI). I weep for the sordid inversion of values and priorities among the African leaders. You can imagine one leader creating an ecosystem for cows and another creating an ecosystem for entrepreneurs! African leaders need to work on their thought patterns and stop caressing lowly thoughts and demeaning perspectives. We have been made to hang our hope on foreign aids whereas we should be looking into increasing the volume and traffic of foreign trade between Africa and the rest of the world. Foreign trade and not foreign aid should be the new life-line for Africa.

At the interactive session, the French President presented some of his convictions about Africa and probably some of his personal life perspectives that other African leaders rarely share:

STOP ASKING FOR PERMISSION: Never follow the advice of waiting for your time, the time is now! When President Buhari signed the #NotTooYoungToRule bill into law, he actually attached a caveat to it: Youth should wait for their turn and allow him to take another turn in 2019! I find it very hard to reconcile when one President believe that the time is now and another says, “Wait awhile”. Someone once said that the great wile of the enemy is ‘wait awhile’! President Macron told the youths that they will always hear statements like: It is not yet your time; Just wait a little bit; Your turn will soon come. Macron said, “I never ask for permission and even when I tried to get some advice from the insiders in the game, the first advice was ‘You should wait a little bit, at a point in time it will be for you but not now. Never follow this kind of advice’ ”.

DON’T WAIT FOR THE RIGHT ENVIRONMENT, CREATE ONE: Abraham Lincoln said, “The best way to predict the future is to create it”. One of the high moments of the interactive session was the time when a young man stood to affirm that he doubts it if Mark Zuckerberg would have amounted to much in life if he was a Nigerian. Macron looked around for like few seconds probably to feel the hopelessness in the faces of some young Nigerians that were desirous to hear his answer to this poser. Macron started by saying that our nationality must never affect our success story. He categorized every youths into two categories: Those that are waiting for the right environment, and those that create the right environment. No environment is strong enough to be the reason why you fail in life!

AFRICAN PROBLEMS NEED AFRICAN SOLUTION: President Macron challenged the African youths and entrepreneur to take responsibilities for Africa’s development. He pointedly said that Africa’s future should be in Africa’s hands. Praise George once said, “It is victim mentality to hold others responsible for the situation in your own life”. Our victim mentality (always believing that the western world is responsible for our predicament) is seriously encroaching on our ability to see ourselves as the solution to our problems.

AFRICA DOESN’T NEED CHARITY; IT NEEDS GOOD LEADERSHIP: Africa don’t actually need charity, the continent is far more blessed in resources than any other. All we need are good leaders that will channel these resources towards the development of their countries. Leadership failure is Africa’s greatest challenge.

AFRICAN YOUTHS HAVE A LOT OF RESPONSIBILITIES AND OPPORTUNITIES: The hope of Africa is in the hands of the African youths. The problems in Africa can only be solved through renewed thinking youths. The African youth must stop playing the second fiddle and start taking their rightful places. When youths delegate their responsibilities, they often become relegated in the affairs of their nation. Being a youth himself, Macron has called out to African youths to stop whining and start winning. Youths must refuse to be spectators in the affairs of their nation, they must start taking responsibilities and seizing opportunities. Jim Rohn said, “The day you graduate from childhood to adulthood is the day you take full responsibility for your life”.

NEVER STOP AT THE FIRST FAILURE: When you don’t fail, then there is nothing to learn! Macron said, “If you don’t fail, you become dangerous for yourself”. Macron advised start-up entrepreneurs to see failure as feedback and not setback. Thomas Edison said, “Many of life’s failure are people who did not realize how close they were to success when they gave up”.

AFRICA’S HOPE IS IN THE PRIVATE SECTOR: Politics and government can create policies, but it is only the private sector and strong institutions that make a great nation. Macron said, “I think the easiest way to succeed as a nation is to have a strong private sector, it is the only way to have an inclusive and sustainable growth”. France has initiated an investment fund for private sector players in Africa to foster innovation and enable them to scale up their business enterprises.

HAVE A SUSTAINABLE VISION: John Scully said, “The future belongs to those who see possibilities before they become obvious”. One of the characteristics of sustainable visions is that they are inclusive. Macron said, “If you don’t have a vision that is sustainable, then that vision is a mistake”. We must wire our vision in such a way that it outlive us.

DEFEND THE IDEAS YOU BELIEVE IN: People are as strong as the idea they represent. Victor Hugo once said, “There is one thing stronger than all the armies in the world, and that is an idea whose time has come.” To capture it more succinctly- Nothing is more powerful than an idea whose time has come. The idea of the Nigerian youths taking their rightful places in the nation polity has arrived. We must not miss this timing because it is our finest moment.

TAKE THE RISK: In life, only those who risk going too far can possibly find out how far they can go! “I took the maximum risk of vying for the President in the last election”, said the President. Macron responded to a young man who asked the President to give out an advice for African youths that are willing to disrupt the political space. Macron said, “There is no advice, no model and no recipe for success; you just have to take the risk”. It is not because things are difficult that we do not dare, it is because we do not dare that they are difficult.

AFRICANS IN THE DIASPORA MUST ATTACH THEIR SUCCESS TO THE SUCCESS STORY IN THEIR NATIONS: Macron emphasized that Africans in Diaspora must be part of the success story of their home country. He emphasized that the world needs more Africans to succeed in Africa.

INNOVATE! INNOVATE!! INNOVATE: Macron said that there is no limit to innovation and went further to say that destroying past activities when they no longer make sense is a form of innovation. He talked at length about his government’s idea of creating ‘The Digital Africa Initiative’. France has endorsed an initiative to develop entrepreneurship and innovation in Africa, with the European superpower offering €1 billion (N500 billion) to kick-start the scheme. Tagged Digital Africa Initiative (DAI), it is aimed at creating a pool of entrepreneurial knowledge and business information sharing, as well as attracting French, African and European businesses to the new narrative of the continent’s emerging entrepreneurs. The idea is meant to create an entrepreneurship ecosystem in which start-up entrepreneurs from Africa will have access to information, mentors and funds from Europe.

Former U.N Secretary-General, Kofi Annan once said, “A society that cuts off its youth severe its lifeline”. Young people everywhere must rise up and be at the forefront of global change and innovation. The African youths must rise up to challenge the status quo. A renewed thinking and incorruptible youth is an asset to the future. Politics and policy-making are still in the archaic stage; youths need to get involve for it to evolve!

QUOTE OF THE WEEK: “The youth of a nation are the trustees of posterity”-Benjamin Disraeli

Stay In Your Strength Zone But Move Out Of Your Comfort Zone
You May Be Irreplaceable But You Are Not Indispensable! Be Humble Or You Will Stumble