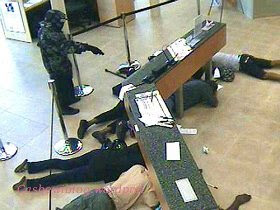 Lagos State Police command today alerted management of hospitals in the state to be wary of suspected armed robbers who disguise as patients.

The Commissioner of Police in the state, Mr Fatai Owoseni, gave the warning while addressing journalists on the activities of the command in the last one month.

Owoseni said that such robbers pretended to be seriously sick, and as soon as they were brought into the hospital, robbed patients and medical staff.

He said that two suspects had been arrested in connection with such crime, while the police was on the trail of other members of the gang.
The commissioner said that the suspects were arrested at Ajangbadi area of the state after they had robbed a hospital.

“The gang pretended as if one of them was injured, and with plaster pasted on his stomach, rushed him to the hospital screaming for help.

“Immediately they were allowed into the hospital, they brought out their guns and robbed every patient in the hospital of their phones, money and other valuables,” he said.

The police commissioner said the suspects would be charged to court after conclusion of investigation.

One of the suspects, name withheld, who spoke with the News Agency of Nigeria (NAN) on the sidelines of the briefing, said he was introduced into the robbery operation by one Ahmed now at large.

“They trained me for about a week before we went out on operation.
‘’When we get to the gate of the hospital, the sick person will be crying, calling for emergency.

“Immediately we are allowed into the hospital, we bring out our guns and rob the patients and medical personnel on duty, but we don’t kill people; we only collect money and phones,” he said.

The suspect said that his gang had robbed about five different hospitals at Ajangbadi, Shibiri and other parts of the community since he joined.

Continue Reading
You may also like...
Related Topics:armed, hospital, robbers