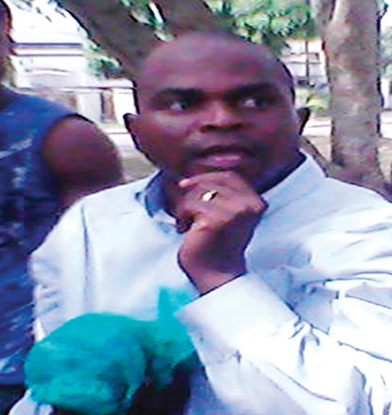 A 50-year-old man, Godwin Atang, yesterday lost N180,000 a to group of robbers popularly called ‘one chance’. Atang, who cried uncontrollably along the popular Murtala Mohammed Way in Calabar, Cross River State, said he had left his company, Iwansco Drinks Distribution Company at Mbukpa axis of Calabar South with N180,000 which he intended to deposit in a bank on the road.

The man said he boarded a taxi from Calabar South to the highway, but after he disembarked, he decided to check the money only to discover a pile of papers in the bag. He said:

“My name is Elder Godwin Atang and I work with Iwansco Drinks Distribution Company in Mbukpa. I had N180,000 which my director asked me to deposit at the bank here. The taxi driver who dropped me played a dirty trick on me by pretending to open the door for me only to touch me with his magic which has resulted in the whole money becoming papers in my hand.”

The father of three said he had to take “a drop” to avoid either delay on the way or somebody sitting close to him.

“I sat with the driver in front and there was no other person with us since I decided to take a drop to avoid delay on the road or somebody tampering with the money. I did not know that I entered a cab with a ‘magical’ driver who would eventually rob me of the entire money.
“When we got to this place (opposite the bank), he pretended to open the door for me so that his hand could touch me. He said there was a problem with the door and he alone understood how to open it. I allowed him not knowing that he just wanted to touch me so that the money would disappear.

I have been hearing about this kind of thing but this is the first time I am experiencing it.” When asked if he could identify the driver, Atang said; “I am not so sure I can identify him. While we were coming, he just kept looking at the side mirror and he was not really talking to me.
I just wanted to come and deposit the money and return to the office. As soon as he dropped me, he just sped away and immediately he left,it dawned on me to check the money only to discover the papers.” Atang, who cried like a baby after the discovery, attracted a crowd of people who gathered to sympathise with him.

Some policemen, however, went with him to his company to report the incident. The incident came barely 72 hours after the state Commandant of the Nigeria Security and Civil Defence Corps (NSCDC), Mr Clement Adewuyi, warned the public of the existence of a ‘one chance’ syndicate in the state.

When contacted, the state Police Public Relations Officer (PPRO), ASP John Eluu, said the police had received reports of the activities of the syndicate in recent times.

He said: “But since no victim has laid hands on anybody, we cannot do anything now.” Eluu, however, appealed to the public to be careful with the drivers, especially as the festive period approaches.

Continue Reading
You may also like...
Related Topics:one chance robbers in calabar