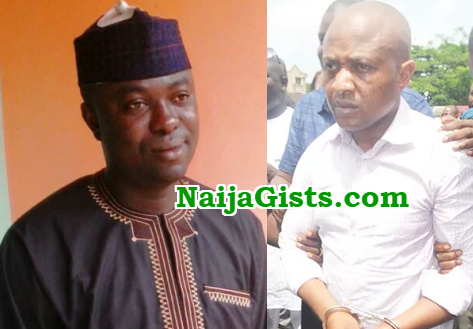 Evans, through Ogungbeje, has filed a N300million fundamental rights enforcement suit against the Inspector-General of Police (IGP), alleging wrongful detention.

Joined as respondents in the suit are the Nigerian Police Force (NPF), Commissioner of Police in Lagos and the Lagos State Anti-Robbery Squad (SARS) as second, third and fourth respondents respectively.

The suit was stalled before Justice Abdulaziz Anka at the last hearing on July 20, following Ogungbeje’s failure to comply with a July 13 order to pay the police N20,000 as costs.

However, at the commencement of proceedings on Tuesday, Ogungbeje informed Justice Anka that the costs were paid on August 10.

The counsel said he had complied with the court’s order to serve the respondents and that the matter was ripe for hearing.

But counsel to the police commissioner and SARS, Emmanuel Eze, opposed him.

Eze, who explained the absence of counsel to the IGP and NPF, argued that Ogungbeje failed to serve them in Abuja as directed by the judge.

He said: “It is not true that the matter is ripe for hearing. This is a fundamental rights enforcement suit brought by the applicant.

Relying on Section 215 of the Constitution and Order 5 Rule 8 of the Fundamental Rights Enforcement Procedure Rules 2009, Eze argued that the Lagos police commissioner and the IGP were distinct personalities.

Ogungbeje, he stated, had only served the police commissioner at Alagbon in Lagos but had yet to serve the IGP in Abuja.

He added: “Our submission is that he has not taken steps to clothe this court with jurisdiction to hear this case.”

“Since Ogungbeje has refused to do the right thing, we are asking the court for costs of N300, 000.”

But countering him, Ogungbeje maintained that the IGP and NPF were served on June 29 at the addresses contained on the originating motion and the proof of service was in the court’s file.

Justice Anka adjourned the matter till Wednesday for ruling.