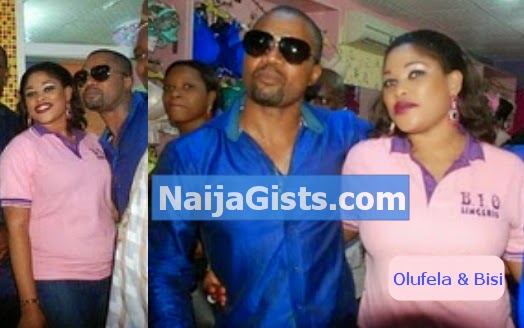 Bisi Ibidapo Obe, the ONE & ONLY Omologbalogba enjoyment girl of Nollywood has openly denied the man she introduced recently as her new lover.

Some months back, Bisi opened a sex toy store in Magodo area of Lagos and introduced her lover as the one who has been by her side throughout her ordeal in the hand of Dino Melaye.

As earlier reported by NaijaGists.com, the mother of one has been dumped by Olufela for an Abuja-based big girl.

When contacted over the phone to verify the story, the mother of one who sounded very upset denied any existing relationship with the man she openly introduced to fans and colleagues.

‘“I don’t even know who you are referring to .I don’t know who you’re referring to. I don’t know any Olufela. The only Fela i know is Anikulapo Kuti. So, the man you are talking about is very strange to me. Some people have also called me on the same issue, and I told them I don’t know him. So, why are you people bothering me. I don’t want to be rude on phone. Please, don’t ask me anything about that again. Please let me be .’’ – Bisi Ibidapo told a Lagos-based softsell magazine.

According to sources close to her, since the guy dumped her, she has become very bitter.

A source who intimated NaijaGists.com few hours ago said Bisi Ibidapo has not been relating well with friends and family members since the heart break.

The source said she has resorted to raining curses on the guy who suddenly left her heartbroken.

E no easy.. hope she gets over it.