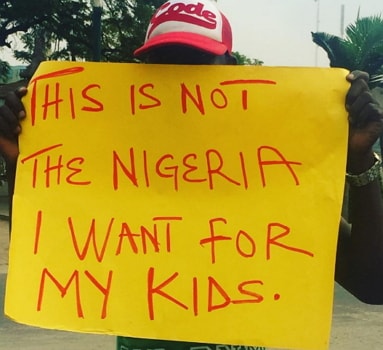 Bitter Truth: Nigeria Will Not Progress Until We Overcome The Incumbent Ruling Class

Nigeria fails as a nation because we fail as patriots. We do not muster a superior culture of nationhood. Instead, we curate the worst that we dared espouse, labelling it the ‘Nigerian factor,’ and embellishing it as our flamboyant code of conduct.

We have murderous knaves controlling our ruling and opposition parties; promising youth enslaved by dangerous tokens, and a sly, desperate electorate confined by greed, poverty of tact and the purse.

We mould our clans where tribal foolery fraternises with vile. Senior citizenry molests our young in a never-ending cycle of sleaze and moral paedophilia. But the young are hardly the prey we think they are. Every second, they morph from starry-eyed victims to eager participants and masterminds of our dehumanising ritual of violence, mental, biological aberration.

Ours is a classic tale of Darwinian waste and mayhem, the squalor and rot of Nigerianness – a distortion of African civilisation. Nevertheless, we block the real import and consequences of this hideous cycle on our psyches and our future as a nation, that we might retain our integrity as brutes and eternal wildlings, perhaps.

Western science and cultural aesthetics predictably, become apparatus in our frantic attempt to revise the Nigerian horror into imaginatively palatable form. Notwithstanding our frantic lunge for substance and acclaim on frontiers, where the world’s more advanced civilisations project their race and illusions of oneness, Nigeria remains hideous in name and status.

While we make exaggerated gestures in the fields of space science, information technology, industry, sports, and so on, Nigerian children die at birth and thousands of mothers die in painful labour. The youth are unemployed. Public officers loot public coffers with impunity and disregard for Rule of Law. Law enforcement officers turn violent affliction on the citizenry and society, that they ought to protect; and the executive, legislative and judicial arms of government mesh in a fetid whirl of strife and plunder. Anarchy rules our hinterlands and metropolitan Nigeria.

While this piece too, resounds as hackneyed howl and lamentation, a regurgitation of the towering monstrosity we have become, it need be restated that our ultimate nemesis is the Nigerian youth.

The youth epitomise the nub of discord and deathly rally ripping the tide of our march to progress. Why do promising youth evolve like brutes and loathsome trolls? How did our once incandescent spokes of dawn erupt in moonshine?

Many have attributed the afflictions of the Nigerian youth to lousy leadership, a nonstop dominance of the predatory ruling class and tiring recalcitrance of the younger generation to engage in communal and national politics beneficially. Many more would readily diagnose the maladies of the nation’s youth to structural banes and the perverse culture of citizenship by which they are weaned and ushered into adulthood.

In the wake of plausible and often farfetched analyses, too many ‘patriots’ conveniently excuse themselves from the nexus of blame and severally propound the sad realisation that Nigerians are innately incapable of self-determination and self-governance. Many still recommend the American example, the British palliative, the Chinese abracadabra and Malaysian ingenuity among others, as solutions to the nation’s ills. How?

These arguments have overtime, attained a language of their own and thus evolved as a dialect of dissent and exaggerated self-abnegation. The nation’s academic elite, political and economic ruling classes frequently marshal clashing precepts as solutions and justifiable putdown of the ruling class and the lower working class as their politics dictates.

A more damning view identifies the electorate’s persistent claims to victimhood and sense of entitlement as whiny and symptomatic of a dense and irresponsible citizenry. Between the conflict of hyperboles and emotional vituperation, Nigeria suffers the affliction of intellectual miscreants and promising youth-turned-foetal-adults.

As youths, the coordinated tragedies afflicting our consciousness daily, append the only real structure to our lives as impoverished Nigerians. The disturbing reality of fast slipping youth, the recurrent rites of bigotry and ethical quandary of coping with the strict moral code of adulthood and ideal society, obscures our understanding of life’s ultimate purpose and meaning. It spurs millions of misguided Nigerian youth to engage in mad, desperate pursuit of fast and fleeting riches, even as ripples of their actions keep hundreds of millions more in the doldrums and binds of despair.

Consequently, the radical dissent that sprouts from oppression is pitiless and unbending. It splits our world into ‘insensitive ruling class’ and ‘clueless lower class,’ ‘elite’ and ‘downtrodden,’ ‘haves’ and ‘have-nots.’ It fosters even more fragmented discord that continually pits Nigerian Christians against Muslims, Hausa against Igbo, Igbo against Yoruba, and Yoruba against Ijaw. It promotes spurious segmentation of our society into moral and amoral, good against evil, and apostates versus believers. Within this poisonous clime, the Nigerian child is born. If he survives the birth hour, he is violently thrust into adolescence and misshapen adulthood.

From Boko Haram and Niger Delta Avengers (NDA) terrorism, internet fraud, cyber-terrorism, financial/bankers’ terrorism and political terrorism emblematic of the ruling class, recent developments in the country present a sad prologue to a heinous and wider conflict between the nation’s wealthy ruling class and the impoverished majority of the breadlines and disappearing middle-class.

Thus, our society drifts rudderless on a seething sea of sleaze. Now that our world as we have made it begins to collapse, we withdraw from the possibility of rebirth, and choose to exploit ‘infinite possibilities’ in our fragility and doomsday predictions.

En route 2019, the youth, predictably, becomes ruling class muscles in the theatre of ruin and discord. Yet, no child of the ruling class is co-opted in the ritual of bloodshed and death. They are tucked, safely abroad.

It’s about time we shunned the politics of spurious militancy, bloodshed and devastation, to embrace growth and immense possibilities of progressive endeavour, like a political platform founded by the youth, for all and posterity.

Continue Reading
You may also like...
Related Topics:this is not the nigeria i want for my kids

What Every Nigerians Must Know About Recovered $323Million Abacha Loot & How It Will Be Shared
Ekiti State Election, Macron Childish Visit To Fela Shrine & Other Issues Of Concern