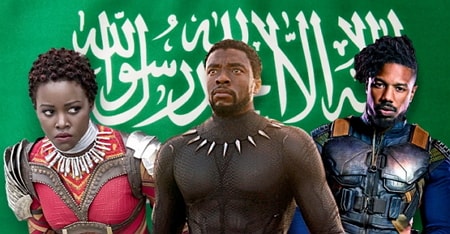 Saudi Arabia has removed the 35 -year-long ban placed on cinema in the country.

Saudi’s first cinema, AMC will officially open on the 18th of April 2018 in Riyadh.

According to the Washington Post, Marvel’s record-breaking superhero blockbuster, which has already amassed north of $1.2 billion since launching in February, will herald Saudi Arabia’s long-awaited return to the cinema world.

It will be the first film to screen to the public in a movie theatre in the country since it lifted a 35-year cinema ban. If the Saudi government wanted to send a message with its film choice, this American blockbuster superhero flick is a good one.

The movie features a fictional African kingdom that uses a mysterious natural resource to rapidly develop, with a young and charismatic prince becoming king and ultimately deciding to use its technological advances and wealth for the good of the greater world.

The news makes Disney and its regional distribution partner in the Middle East, Italia Film, the first to officially release a movie in the kingdom as it undergoes dramatic reforms.

The film will be given a gala premiere on April 18 in Riyadh at the first AMC-branded cinema, which was announced Wednesday, according to The Hollywood Reporter.

The 620-seater theatre set to open less than four months after the ban lifting was announced in December is a converted symphony hall in the King Abdullah Financial District and is the first of hundreds of cinemas planned to open in the next decade.

Black Panther is set to play for five days in Riyadh and will be swiftly followed by Avengers: Infinity War, which is being given a day-and-date release on April 26.

Saudi Arabia’s cinemas are reopening under the guidance of Crown Prince Mohammed bin Salman, 32. Vast oil reserves have made the country fantastically wealthy, and Salman is pushing hard to use these riches to restructure the country politically and economically before they run out, as part of a plan dubbed “Vision 2030.”

Continue Reading
You may also like...
Related Topics:arab, black panther