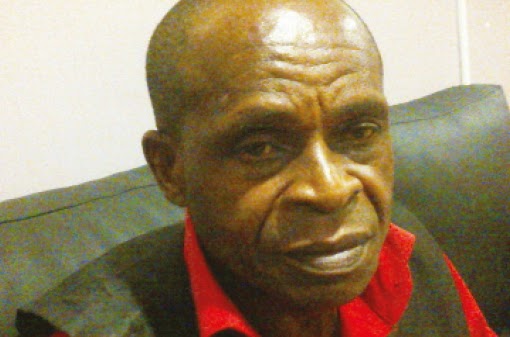 Pastor Lawrence Okechukwu Amuruche, a 61-year-old father of two, has cried out for help after the anointing oil, water and prayer points given him by the General Overseer of his church, Mountain of Fire and Miracles Ministries (MFM), Dr. Daniel Kolawole Olukoya failed to stop the cataract growing in his eyes.

Amuruche, who pastors the Alakija, Satelite town branch of the MFM, said for over a year, he has been battling with eye cataract which has already grown on one eye and threatening to start growing on the second eye if medical help does not come fast.

Narrating his ordeal when he visited The Sun head office in Lagos, Pastor Amuruche said the problem started when he noticed his eyes were always itching him, a which development degenerated into blurry sight later. According to him: “I noticed my eyes always scratch me and at a point my vision changed, my sight became blurring. I told my wife about it, she looked into my eyes and told me there was a growth forming in my eyes. So, we sought medical advice.”

The optician they visited, for medical advice, informed him that he had developed an eye cataract and that the only way it can be treated is surgery. “I went to an optician in the estate where I live who told me that it is cataract and that the only way out is surgery. Initially, I didn’t know what the problem was because I have not experienced it before and it is not in my lineage. So, we went to Eye Foundation Hospital, Ikeja, for treatment.”

“At the hospital”, Pastor Amuruche continues, “they said I should provide N450,000 per eye. That is N900,000 for the two eyes but I cannot afford it. I did an eye test for which I paid N130,000 pending the time I will get money for the surgery. But I have not been able to raise money and my situation is getting worse by the day.”

In his quest to seek alternative treatment for his eyes at no cost, Pastor Amuruche embarked on a journey to Isiukwuato LGA, Abia State, when he heard that a group of opticians flew in from the United States to help people with eye problems free-of-charge.Unfortunately, his effort to get cured was frustrated by the mammoth crowd that besieged the venue. “I spent five days there but I could not do the surgery because the crowd was much. That is how I have been going around for assistance and now it is moving to the other eye”, he stated.

Asked if the church has done anything to assist him, he looked up from the documents he was sorting with a torchlight, under a well lit room and thick lens glasses on his eyes, and said: “I have gone to my General Overseer for money to do the surgery. To get him was a problem. It was just last week that I was able to get him. But instead of giving me money to do the surgery, he gave anointing oil, prayer points and water to be washing my face. I told him that I have prayed. I have been doing fasting and have been doing vigils concerning the eyes. But it has been deteriorating. If my coming out to seek for help will lead to my sack, let him sack me and I will go instead of losing my eyes in the name of ministry. And I will not be able to minister, I will not pastor and I will be in the house and they will not pay me.”