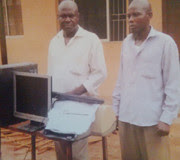 In what seems to be a great betrayal, a medical practitioner, Dr Iyk Maduba has allegedly been swindled by his own blood brother, Chizoba Maduba, who sold the doctor’s land for N12m in Lagos State, western Nigeria.

Chizoba allegedly forged Iyk’s land documents and conspired with three other suspects, Emmanuel Adebayo, Ikechukwu Iwuoha and Moruf Olarewaju and sold the land for N12m and shared the money.
The incident happened at Okeafa area in Ejigbo, Lagos where the property was located.

Following the scam, the police arrested the suspects involved and charged them before Ejigbo Magistrates’ court with conspiracy, forgery and stealing.

According to the police, Iyk acquired the landed property some years ago and entrusted it to Chizoba’s care pending when he will be ready to develop the land.

Unknown to Iyk, Chizoba arranged with the other suspects and forged documents for the land and sold it to a buyer.

When Iyk was eventually ready to develop the land, he asked Chizoba to take him to the land to assess it before he would commence work.

When they got there, Iyk discovered that a structure had been erected on the land.
When he confronted the person building on the land, he told him that he bought the land from Chizoba and presented the documents to that effect.

He handed him to the police where he implicated other suspects who were also rounded up for prosecution.
When they were arraigned, they pleaded not guilty.

The presiding magistrate, Mrs J. O. E. Adeyemi granted them bail in the sum of N500,000 with two sureties in like sum.

They were remanded in prison custody at Kirikiri pending when they will perfect their bail condition.
The matter was adjourned till 11 December, 2015.

Continue Reading
You may also like...
Related Topics:Brother, doctor, Medical