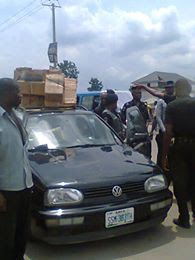 A Police escort Sergeant William Relomer, an official of Oyigbo Local Government Council of Rivers State; and a driver were on Tuesday afternoon gunned down by armed robbers in Port Harcourt, the state capital.

The bandits also escaped with a huge sum of money belonging to Oyigbo LG council, earlier withdrawn from a new generation bank , along ever-busy Olu-Obasanjo Road, Port Harcourt and the policeman’s rifle.
The robbery took place around 12 noon along the Olu-Obasanjo Road, which divides the highbrow new Government Reservation Area (GRA) and D-Line, with many commercial banks, corporate organisations, hotels and other business outfits.

Witnesses revealed that the four bandits trailed the three occupants of a Toyota Thundra car, after withdrawing the money from the new generation bank and they had not gone far, when the armed robbers opened fire, killing all of them on the spot.

It was also disclosed that the armed robbers drove in a Toyota Camry car, but in view of the heavy traffic on Olu Obasanjo Road, they parked close to the Rivers Transport Company (RTC) loading point near Waterlines Bus Stop, off Port Harcourt-Aba Expressway and trekked towards the victims’ car, not far from the bank, where the transaction took place.

It was learnt that the bandits targeted the fully-armed riot policeman, who they felt might want to repel the attack, but he was caught unawares, as bullets were first rained on him.

It was also gathered that with Olu Obasanjo Road adjoining roads and streets deserted, the armed robbers quickly escaped, while still shooting sporadically, since the spot is not far from the Olu Obasanjo Divisional Police Headquarters, along the same road, where the bandits operated unchallenged.

With the escape of the bandits, policemen later came and picked the three bodies.
It was learnt that the bodies of the policeman and the local government official were first moved away, while the security personnel later returned to the horrific scene and picked the body of the driver, that was fully soaked with blood.