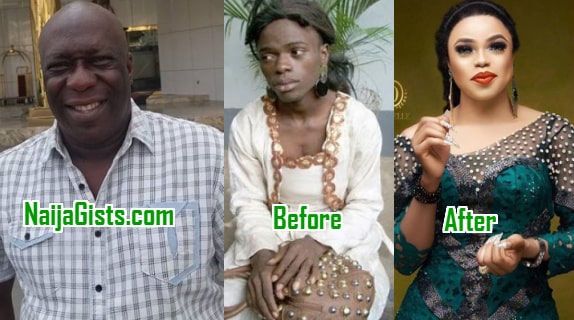 Bobrisky Disfigured Himself To Be A Woman, He Is Encouraging Other Nigerians To Turn Gay, Shame On Nollywood Producers Featuring Him – Charles Awurum

Veteran Nollywood actor Charles Awurum is not backing down on his critic of notorious gay prostitute, Bobrisky who became an overnight celebrity after allegedly joining a gay cult in Abuja.

Idris Okuneye who is still walking free on the streets of Nigeria today has become the choice of most producers in Nollywood over his popularity on the social media.

Here is what Charles Awurum said about the controversial cross dresser.

“I don’t even want to make further statements about this issue. What I said in the video was for posterity sake. When they started producing pornographic movies in Asaba, I was one of the people who cried out about it. I don’t want to make further statements about Bobrisky; I just aired my opinion about the movie industry. Our movie industry is turning into something else.

“There was a time I was watching a movie and the theme and plot of the movie were not properly organised. The scenes were not synchronised at all. Our movies now lack good stories; the themes are disjointed. Our television stations air these movies without vetting them.

“All these sex scenes are not part of our culture. People are free to live their lives the way they want but they should bear this in mind – promoting cross-dressers will cause the next generation to buy into it. One day, a President will just approve homosexuality. That is what I am bothered about; I didn’t mean to insult anybody. That was a comic way of passing my message across. Anybody can go to hell if they want to,”

“Featuring a cross-dresser in a movie can be a comic way of achieving a storyline. The viewers would understand that the individual is a man who is trying to play the role of deceit in the movie. Another instance is writing a script that preaches that being gay is a sin. These kinds of storylines are acceptable. However, it is not acceptable to feature someone who used to be a man and disfigured himself into a woman”.

However, in Bobrisky’s reply, he stated that the Nollywood actor was one of the poorest men in the movie industry. Reacting to this statement, Anwurum said he laughed about it when he saw it.

“I was very happy with his reply because it shows that he felt bad about the video. When you feel bad about an issue, it shows you know what you are doing is not good. I was laughing when I read what he said about me being the poorest actor in Nollywood.

“I am trying to create a future for the generation yet unborn. Movies are the eyes of the society. I am happy that over 90 per cent of my followers supported my view. It is my opinion; I am not forcing everyone to agree with it. I just decided to do it in a comic way. If Bobrisky feels pained, let him go into his house and cry. I didn’t want to talk about it because doing that will mean giving him more attention.

“I am only bothered about the future of the movie industry. The sentence he made about me not being successful as a man may encourage other young men to toe that path. Even if he claims he is not gay, he is encouraging people who have the tendency of being gay. If he is not gay, he should use his platform to tell people that being gay is bad”.

Bolanle Ninalowo: I Was An Accountant In America Before Relocating To Nigeria
Francis Odega: I Kicked My Wife Out Because She Is Troublesome