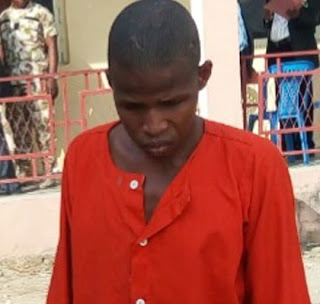 Feb 14, 2018 – Boko Haram Commander Sentenced To 60 Years In Prison Vows To Return To Sambisa If Released

The court also sentenced 32-year-old Mohammed Hussaini, a Chadian brought up in Talwari Village, Damboa Local Government Area of Borno State, to 20 years imprisonment for participating in various Boko Haram attacks in Maiduguri and Damaturu and for also professing to be a member of the sect.

Umar and Hussaini were among the over 40 members of the sect convicted on Tuesday by the four courts sitting in Wawa Cantonment to fast-track the cases of over 1,000 terror suspects held in the detention facility in the barracks.

At least 10 persons including 18-year-old Nathaniel Obidah were either discharged and acquitted or had the cases against them struck out due to lack of evidence.

The prosecution withdrew the case against Obidah after realising that he was merely 12 years old as of the time he was said to have committed the alleged offence of running errands for Boko Haram members in the Sambisa Forest.

The proceedings in the four courts which resumed on Monday were observed by the Nigerian Bar Association and the National Human Rights Commission.

The 22-year-old Umar, was not remorseful throughout the proceedings on Tuesday.

He confirmed during the proceedings that he would return to Sambisa Forest to continue the terrorist acts if he was released.

He had been in detention since 2014 after his failed suicide mission to a school in Gombe that year.