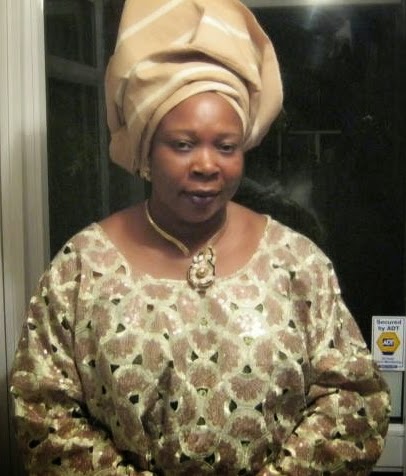 Update received from the deceased daughter May 7, 2015

My mother Bola Amole was never a cultist

I am one of the children of the late Bola Amole, and I really hope you can please understand where I am coming from, this is absolutely false and was created by Bola Amole Tenant in London who refuses to pay rent of about £15,000 called INFINITY International Textiles.
Bola Amole was buried peacefully in a chapel and at the burial ground of Vault and Garden.
The people of London created the rumour of ogboni cultist, especially her tenants in her property.

A source just sent NaijaGists.com an update that the corpse of late businesswoman, Bola Amole who reportedly died in the hand of assassins has been seized by some members of the Ogboni confraternity.

The source said the woman live next to her house and that before her death, the cultists have been pressuring her to pay her due to them.

We learnt that Bola Amole’s corpse was hijacked from the family by the cultists at a mortuary in Ibadan on Wednesday.

As we speak she has been taken to an unknown location for Ogboni burial rites.

Bola Amole, the richest woman in Ibadan has been rumoured to be a dedicated member of the Ogboni fraternity, the source said she was murdered in her sleep on Saturday the 10th of January 2015.

Before her death, the wealthy woman left her thriving business in the United Kingdom to pursue a political career back home. She even paid to have her way after losing a bid to secure ticket under the Accord party.

The latest story making round in Ibadan is that Bola Amole was a member of Ogboni fraternity and that the people killed her because she refused to pay her due to them.

According to Islamic rites, Amole should be buried hours after her death but the group has stopped clerics from getting access to where they kept her body.

Not all that glitters is gold. May her soul rest in peace.