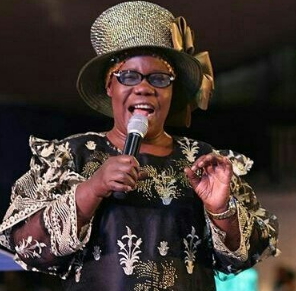 Come Saturday the 4th of November 2017, veteran gospel star Evangelist Bola Are will be celebrating the 40 year anniversary of her evergreen song, ‘Baba Ku Ise’.

The musician who is not sparing anything to celebrate has urged everyone especially those looking up to God for the fruit of the womb to join her at Jogor Centre event center on Liberty Road in Oke Ado Ibadan at 10am on the aforementioned date.

See the flyer below for more…. 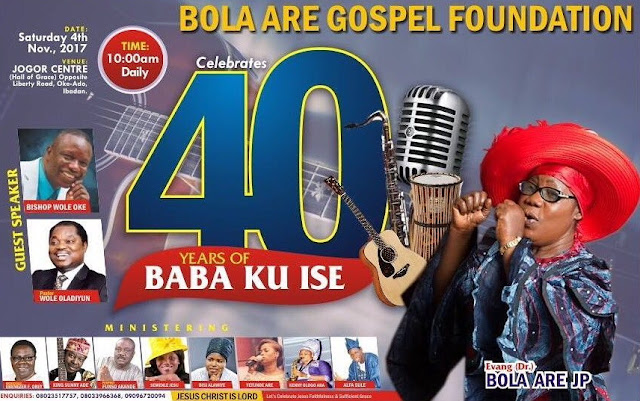 Here is what the veteran musician told Saturday Beats;

“There was a time I went to Alapere, Lagos and I was singing my song, ‘Baba ku ise,’ there was someone around called Tawakalitu, who had been pregnant for about four and a half years. The Lord told me to keep singing the song because someone there was in bondage, so I continued. Shortly after, a lady fell down and on the third day, she was delivered of a baby girl whom was named Tosin. Three days ago, Tosin called.

There was also a lady, Deborah, who was pregnant for about three years but the song served as a means of deliverance and she gave birth shortly after my ministration. Her child came to my church recently to visit me. This lady lives in Ketu, Lagos. There was also another day I was singing the song in the presence of Archbishop Idahosa at Olubadan Stadium many years ago and during my ministration, a man who had been mad for about 12 years named Gabriel was healed. The man rushed to the stage and everybody ran out of fear but the spirit of the Lord told me to be brave and stand my ground. He had got close to me but the Lord said I should keep singing and ask for his name. I listened to the instruction and immediately the mad man answered me, he began to cry; then he fell down. That was how he became sane again.”

What actually happened was that I was heading to work, Tewogbade and Sons Ltd. Ibadan, where I worked as a store keeper. I was passing through the house of the late Obafemi Awolowo when I heard a voice that commanded me to stop at the narrow path I was. The Lord gave me the song on the road at about 6:30am; it was as if I was in a trance because everyone who passed by me greeted me but I did not respond because I could not hear them. It was when the Lord was through teaching me the song that

I was aware of my surrounding once again. After the encounter with the Lord, there was a woman passing by called Moji and I was instructed to tell her and her friend Grace, to pay me a visit at home at about 4pm that day. The lady came with her friend to my house later that day and we formed my first band.

That day was June 26, 1973. Unfortunately, when I got to work, I had forgotten the song because I was not with a biro or paper and there was no recorder at that time. I began to cry at work, so when my Muslim bosses saw that my eyes were swollen, they asked why I was crying but I could not explain to them because they could not understand; so they asked me to go home and sort myself out.

“I left work and went to CAC Oke Iranti, Challenge, Ibadan. I met my Pastor, Kehinde, and when I explained what happened to him, he simply said that the Lord would send the song to me again after three months. Immediately he told me that, I began to fast and pray for three months before I was taught the song again. All through the period I was fasting, I always went to that CAC church during my lunch break. On the third month, the heavens taught me the song again and ever since then, you would hardly see me without a biro, paper or a recorder. That is how I got inspiration for the song.”

“Those who do not know me would think I am only a singer but I am also a prophetic evangelist. It was the Lord that instructed me to celebrate forty years of the song’s existence.

He had told me since May to celebrate this album and I am following his instructions. That day would be epic and my fans should expect miracles especially women who are looking up to God for the fruit of the womb.”