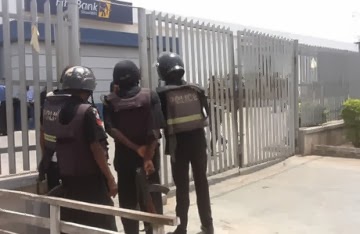 What could have become the biggest tragedy of the year in a busy banking hall in Osogbo today has been averted.

A security personnel attached to a First Bank branch in the capital city of Osun state discovered a wrapped bomb in the banking hall on Tuesday afternoon.

First Bank officials and customers were ordered to evacuate the bank as Anti-Bomb Squad defused the explosive device.

The discovery led to pandemonium in the area as many shop owners closed down while some left their shops and ran for safety.

5 minutes after the bomb was defused, the bank was later reopened. Staff were told to go home due to operations interruption.

Effort to speak with bank officials yielded no result and members of Anti-Bomb Squad and regular policemen deployed in the bank also refused to speak to journalists.