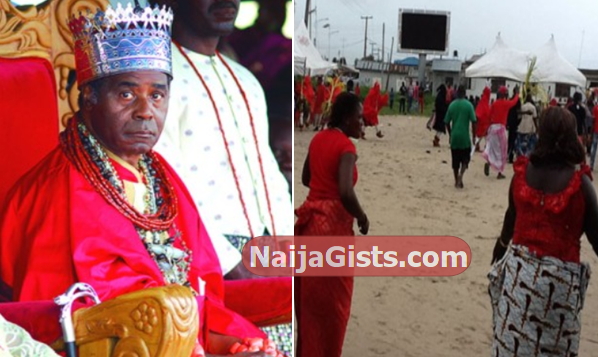 The Olu of Warri, Ogiame Atuwatse II, has finally bowed to his people who insisted that he could not renounce his “Ogiame” traditional title because of his Christian faith.

The entire Itsekiri nation, represented by thousands of men, women and youths this morning marched through the streets adjoining his palace in Warri in protest against the monarch’s decision to renounce his “Ogiame” traditional title.

The protesters defied the early morning rain to express their displeasure over the monarch’s new-found Christian faith which led to his renouncing the title.

Some of them had insisted that the monarch will have to abdicate his throne if he insisted on renouncing the Ogiame title.

Delta State Governor, Dr. Emmanuel Uduaghan, himself an Itsekiri, had to appeal to the aggrieved Itsekiris to sheathe their swords and engage in dialogue to resolve the impasse.

Uduaghan in a press statement, said he had to cut short his official engagement in Abuja to meet with the palace chiefs.

But after the palace chiefs met with the king, he agreed to retain the Ogiame title, which means “King of all Water gods and goddesses.”

It was the title the Olu chose to be known by when he was crowned Olu of Warri in the 80s.

The monarch had renounced the title in a press statement he issued on 4 September, on the ground that he has embraced Christianity and has been born again.

The decision did not go down well with the Itsekiri people, saying that the decision was a slight on their tradition.

This morning’s mass protest was seen as the climax of their disdain for the monarch whom they once revered as second only to Almighty God in the Itsekiri nation.

One of the palace chiefs, Chief Omatseye, who spoke at the protest rally, said the Olu will either renounce his new found faith or  quit the throne, saying that religion and tradition do not mix.

Also, one of the women protesters who identified herself as Omadina, said the Olu would be ungrateful to the Itsekiri nation if he decided to throw away the title.

She said the Itsekiri nation will “never be intimidated by his so-called new-found faith.”
They had vowed never to leave the palace grounds until the monarch renounced his new faith.  Security operatives from 61, Nigerian Air force, Nigerian Police and others were on hand to ensure security of lives and property during the peaceful protest.