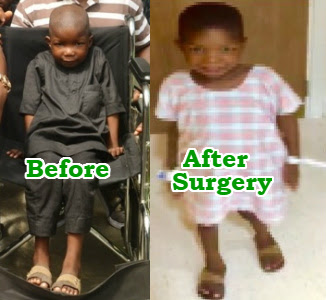 September 24, 2017 – Miracle As Boy Paralyzed By Boko Haram Walks In Dubai Hospital As His Doctors Watched In Shock

Ali Ahmadu, a 6-year old Boko Haram victim has survived a corrective surgery carried out in his spinal cord. He can now walk, after 14 days in the hospital.

While being ferried to Dubai on September 10, all he could mutter repeatedly in Hausa was: “Ina so insake tafiya da kafana…Don Allah ataimakamu…Don Allah. Ina so in je makaranta”. (“I want to begin to walk with my legs again. For God’s sake, assist me. I want to go to school”).

Now Ali can walk as he “miraculously” stood up from his hospital bed to the amazement of his shocked doctors. They had projected that it would take him four weeks to walk.