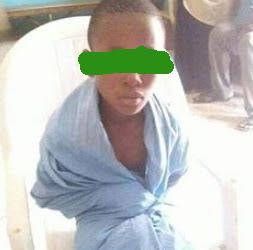 Feb 2nd, 2018- Boy Whose Manhood Was Chopped Off By Uncle For Money Ritual In Niger Rushed To Ilorin Hospital

A little boy whose manhood was chopped off by his ritualist uncle in Niger state has been rushed to a hospital in Ilorin Kwara state.

12-year-old Farouk Ibrahim was reportedly attacked by his uncle, Aliyu Mohammed as he was taking food to his siblings in the farm.

Mohammed squeezed Ibrahim’s throat until he passed out, cut off his manhood and then left him in his pool of blood to die.

A source said Farouk luckily regained consciousness after nine hours and managed to get home, where he narrated his ordeal to his parents, after which he fainted. He was quickly rushed to the hospital and he was revived. ‘

Farouk confirmed that Aliyu attacked him at about 6a.m. on his way to the farm, explaining that the accused held his neck until he became unconscious, only to wake up several hours later.

“I did not know what happened; I woke up in the afternoon and was feeling pains in my manhood.

“When I looked down, I saw I was bleeding and my manhood had been cut off. I managed to stand up and went home, not knowing I could survive.”

Farouk’s other uncle, Usman Aliyu, also explained that Farouk was later rushed to the Teaching Hospital in Illorin, Kwara State, where a temporary surgery was carried out on him with a catheter inserted for him to urinate. He needs plastic surgery.

Head of Surgery at the General Hospital, Minna, Dr. Adamu Bala, who examined Farouk, said though the Teaching Hospital in Illorin tried to save the situation, Farouk may never have a functional manhood unless he goes for an elaborate plastic surgery outside Nigeria. He said he reviewed the case of the boy before referring him to Ilorin Teaching Hospital, where a plastic surgery was carried out on him to stop the bleeding and a catheter inserted so that the boy will be able to pass urine.

“the only unfortunate part was that the amputated part was not seen and could not be fixed back.

“For him to have a functional penis, he will need an elaborate plastic surgery and I don’t think we can do it here in Nigeria. He was passing urine normally, but now he is passing urine through a pipe, which is very abnormal and can be depressing. Therefore, Farouk needs urgent help from everyone so he can have use of his penis again.”

Meanwhile, his attacker has been arrested by police and has confessed to the crime.

Continue Reading
You may also like...
Related Topics:boy, husband, manhood, whose