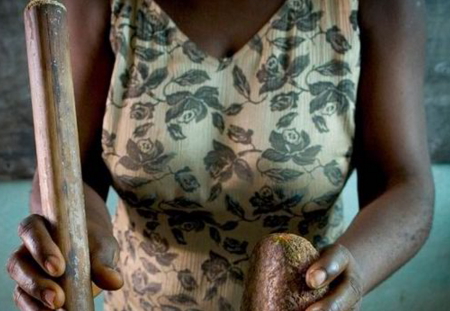 A brutal tradition akin to female genital mutilation is spreading in Cameroon’s war zone. Girls’ breasts are “flattened” with hot irons and stones to keep men at bay.

IKOM, Nigeria — When Grace Tchami started showing signs of puberty at age nine, her mother, hoping to protect her, began to torture her. At about seven o’clock every morning, her mother would take one of the heavy stone pestles used for grinding food and heat it burning hot over a charcoal fire, then press it on Grace’s breasts, attempting to flatten them.

In a small, bamboo-roofed kitchen behind the house, Grace remembers, Mama performed this procedure day after day for three months. Grace’s older brother would hold her legs so she couldn’t run away. And then, still reeling from the ordeal, Grace would be sent along to elementary school. 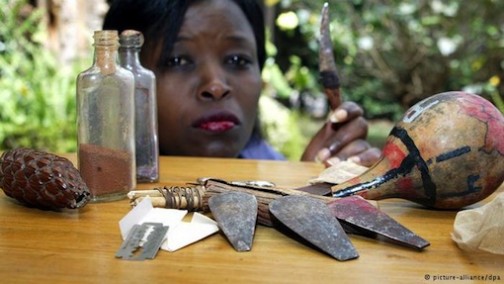 I met Grace, who is now 16, in this southern Nigerian town where she had traveled across the Cameroonian border to buy fabric for her mother’s sewing business. She said she is permanently scarred and still suffers from the trauma. She said her mother told her the goal was to make her less desirable to boys, and thus to kill any chance of her getting pregnant early.

And Grace is not alone. The tradition of “breast ironing” has gone on for years in Cameroon, and appears to be spreading among parents who hope to keep their daughters out of the hands of Boko Haram’s brutal jihadists.

In its its 2014 human rights report on Cameroon, the U.S. State Department likened “breast ironing” to the more prevalent practice of female genital mutilation. This “procedure to flatten a young girl’s growing breasts with hot stones, cast-iron pans, or bricks” has “harmful physical and psychological consequences, which include pain, cysts, abscesses, and physical and psychological scarring,” according to the report.

The United Nations says breast ironing now affects 3.8 million women around the world. While the U.S. human rights report suggested reports of the practice are “rare,” the local press in Cameroon has reported that up to 50 percent of girls undergo the very painful procedure on a daily basis.

Research in 2011 by Gender Empowerment and Development (GEED), a non-governmental organization based in Bamenda in Cameroon’s northwestern region, found that about one in four females in the country had experienced it. In about 58 percent of the cases it was mothers who performed the procedure, believing they were protecting their daughters.

Analysts say breast ironing was initially done by women with the thought of improving a mother’s breast milk. But the thought later changed when rape and teenage pregnancy became rampant. Mothers began to carry out the procedure on their girls as they believed that their daughters’ breasts would expose them to the risk of sexual harassment and early pregnancies.

Girls from rich families are made to wear a wide belt, which presses the breasts and is supposed to prevent them from growing.
While the tradition is widespread in Cameroon, similar practices have been documented in Nigeria, Togo, Republic of Guinea, Côte d’Ivoire and South Africa.
The United Nations Population Fund has named breast ironing as one of five under-reported crimes related to gender-based violence.

Findings from GIZ, the German state-owned development agency, revealed that 39 percent of Cameroonian women oppose breast ironing, while 41 percent support it.
Human rights activists say breast ironing affects women in all 10 of Cameroon’s provinces, and the tradition is practiced by all of Cameroon’s over 200 ethnic groups.

“The process of breast ironing requires the use of any metal, including wooden sticks, pestles, spatulas, spoons and rocks,” said Maryam, a Cameroonian hairdresser now based in Ikom, a home to thousands of Cameroonian migrants and a market place for traders from the Central Africa country. “The heat from these tools is expected to melt the fat on the breast, and stop it from projecting.”

Maryam who said she had practiced breast ironing on two of her daughters, added that other methods can also be used in the practice.
“Most people prefer to wrap very tight elastic bandages around the chest of their daughters overnight, but that system usually keeps the girls very uncomfortable,” she said. “For my daughters, I used hot coconut shells or heated stones to flatten their breasts.”

Breast ironing is less common in Cameroon’s northern region where the population is primarily Muslim. As of 2011, less than one tenth of adolescent girls in the region had undergone the procedure, according to GEED statistics. But now that may be changing as the presence of jihadist group, Boko Haram in the far north seems to be creating an upsurge in the practice.

One Cameroonian mother, who recently began breast ironing procedures on her daughter, told me in Ikom, where she came to buy goods, that she was carrying out the practice in an attempt to make her child less attractive to Boko Haram members who have been abducting adolescent girls and forcing them into marriage.

“I live in Tiko in the southwest but my daughter schools in Maroua in the far north where terrible things happen, and I won’t take chances,” she said. “If they [Boko Haram] don’t see her breast, they won’t think she has come of age.”
Another Cameroonian lady who was in Ikom for trade said she and her sister carried out breast ironing procedures on each of their two daughters, because militants were abducting girls in Maroua where they lived.
“We didn’t want our daughters to be taken to the Sambisa forest,” the lady who gave her name as Agathe said. “It wasn’t just us. Many women did it on their daughters for the same reason.”

In Nigeria’s northeastern Borno State, where Boko Haram was founded, a member of the state’s main vigilante group who spoke to The Daily Beast said some girls who fled the war in the far north of Cameroon into border towns in Borno told members of his group that the breast ironing procedure was carried out on them by their parents when the jihadists began to abduct adolescent girls in the region.

“We’ve spoken to a few girls who said their parents ironed their breasts so that they will appear less attractive to Boko Haram militants,” Abass Bashir of the Civilian Joint Task Force vigilante group, which works closely with government forces in Borno, said. “Some of them said they still feel terrible pain on their breasts and around the chest region.”

Parents in Cameroon’s far north region have grown increasingly scared of seeing their adolescent daughters develop breasts, especially since it was widely reported in February that eight girls between the ages of 11 and 14 were abducted close to the border with Nigeria, almost the same time rumors that the kidnapped Chibok schoolgirls had been married off to Boko Haram militants spread like wild fire in far north Cameroon.

“Some girls said their parents kept reminding them of the eight kidnapped girls and the missing Chibok girls as a way of convincing them to undergo the procedure,” Bashir said. “Their parents told them that these girls would not have been abducted if they hadn’t developed breasts.”

Until Boko Haram began to create a base in the far north, breast ironing was hardly spoken about in the predominantly Muslim region, perhaps as a result of the high rate of early marriage, which eliminates the need to maintain illusions of a girl’s youth. Now, locals say parents are talking themselves into carrying out the practice on their daughters.

“I visited a compound in Mokolo where every girl had undergone the procedure,” said Musa Oumarou another of Cameroon’s hundreds of traders visiting Ikom daily. “A woman whose daughter narrowly escaped Boko Haram capture started the procedure on her lucky child and then convinced her neighbors to carry out the same act on their daughters.”

But just as parents try to prevent abductions and eventual marriages to deadly militants in far north Cameroon, many girls in the region, in an attempt to escape early marriage, try to flatten their own breasts so they can delay their sexual maturity and continue going to school.

Children’s rights activists in Cameroon have for a long time carried out nationwide awareness campaigns in schools, churches and across media outlets aimed at drawing attention to the harmful physical and psychological consequences of breast ironing, a practice which was done mainly in secret until it was exposed to the international community in 2006. But in spite of their efforts, millions of girls are still victims of the horrific tradition.

Health workers believe better hygiene, nutrition and healthcare means that girls are attaining puberty early. A 2011 social and demographic health survey conducted in Cameroon showed that between 20 to 30 percent of Cameroonian girls get pregnant before their 16th birthday, and a third abandon schooling.
Grace became pregnant at the age of 15, but sadly lost her child during childbirth.

She said breast ironing is even more painful than childbirth, and that it did nothing to prevent her from getting pregnant before marriage.
“The whole practice was useless after all,” she said. “Rather than teach, breast ironing kills. My mother should have taught me sex education, rather she let this evil practice devastate me.”

About the author: Philip Obaji Jr. is the founder of 1 GAME, an advocacy and campaigning organization that fights for the right to education for disadvantaged children in Nigeria, especially in northeastern Nigeria, where Boko Haram forbids western education. Follow him @PhilipObaji