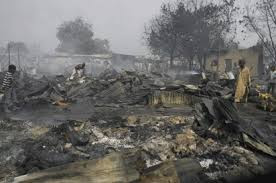 Boko Haram Burns Down Military Base In Gulak Town In Adamawa, Nigerian Soldiers Flee To Safety

Residents of Gulak town in Adamawa have expressed their anger over the way the military abandoned them to the mercy of the dreaded Boko Haram Jihadists.

Civilian fighters are now in charge of Gulak waiting for military reinforcement.

According to a military source who requested anonymity, the soldiers ran away Sunday night when the extremists overpowered them.

The attackers drove off with an army T-72 tank and dozens of new camouflage uniforms, according to the officer, who spoke on condition of anonymity because he is not authorized to speak on the issue.