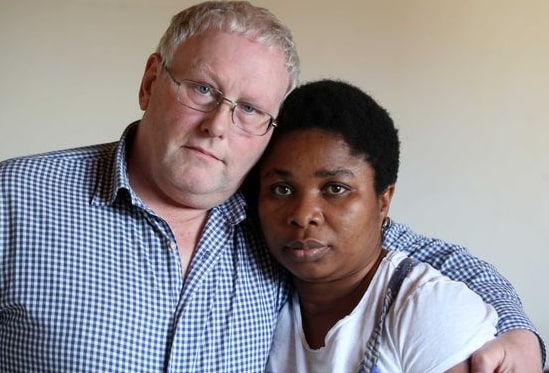 A Nigerian woman is about to be deported in the UK after being convicted of staging a fake marriage.

32-year-old Chimezie husband 52-year-old Robert Rickerby is devastated as the UK Home Office is about to send his wife home.

Rickerby, of Benwell, insists it is true love between him and wife Chimezie – as he pleads with the Home Office to allow her to stay.

Despite a 20-year age gap, the pair got hitched months after meeting while Chimezie was on bail. Shortly after their nuptials, she was jailed for 18 months for attempting to wed Czech-born Pavel Gabco in a sham ceremony. Chimezie was locked up alongside the likes of Rose West in HMP Low Newton.

But since leaving detention, she’s had two kids with Robert – who fears the Government will take their mum from them. 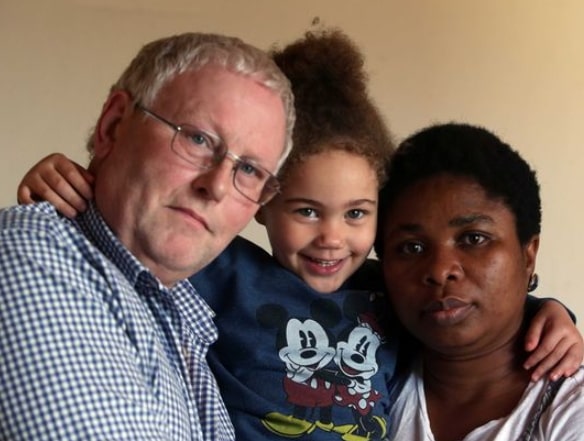 The Home Office say foreign criminals jailed for a year or more, like Chimezie, face automatic deportation. But Robert said:

“I’m worried we will lose her. Every time we apply for a visa, the Home Office refuse it. It is always a different excuse – they say the paperwork hasn’t been properly filled in or something. But this hangs over us every day.”

A decade ago, Chimezie moved to Britain to study at university but her course outlasted her student visa. Newcastle Crown Court heard she pretended to be shacked up with Gabco in a blundering bid to stay.

While on bail, she met Robert who acknowledges there will be skeptics – but he insists their love is true.

“We met in Newcastle – I saw her in the street and she saw me and we smiled. About an hour later, I saw her again and smiled, so we started conversing and exchanged numbers.” – said Robert.

“If it wasn’t love, why would we have gone through the anxiety of the last six years?”.

“She’s not been allowed to work , claim benefits – even open a bank account – and every fortnight we have to go to Middlesbrough to the reporting centre. “And it means my income is the only income we have. After bills we are only left with about £20 or £30-a-month.”

Some of that is swallowed by crippling legal bills to fight a Home Office deportation order.

Robert estimates he’s spent “thousands” on a London-based legal team to help keep his wife on Tyneside. He claims to have enlisted the help of Newcastle MP’s Nick Brown and Chi Onwurah. ChronicleLive contacted both.

According to the couple, during her detention, there were 16 flight tickets issued to deport her. But as her husband, Robert feels his wife, now 32, should be allowed to stay.

“The Home Office ignore the fact that I’m a British citizen and she has kids here,” he said. “This hangs over us permanently and it could split the family up. If she had to leave the children here, I’d have to give up work to look after and support them. If she took them, I’d have to work and support them from here.”

Chimezie’s 2012 trial heard she had entered the UK lawfully, and that she “had not been a burden on the taxpayer”.

But Judge Paul Sloan QC slammed her behaviour as he locked her up.

“It is clear this type of offending, involving an attempt to frustrate immigration controls, as well as striking at the integrity of the institution of marriage, calls for a deterrent sentence,” he said.

But six years on, that offending could be about to catch up with her again – and split the family apart.

“All foreign nationals who are given a custodial sentence will be considered for removal and any foreign criminal who is sentenced to 12 months or more imprisonment must automatically be subject to a deportation order under the UK Borders Act 2007.”