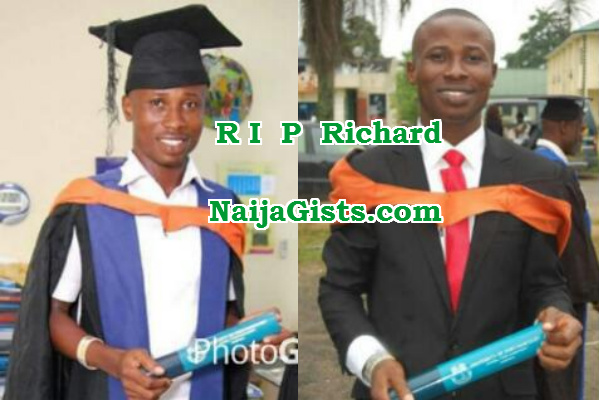 The younger brother of Richard Oghenekevwe, a final year Mech. Engineering student struck and killed by a police patrol van on Sunday has spoken.

Emmanuel Edah, said Oghenekevwe’s death was painful to the family because he was their breadwinner.

Lamenting the death, Emmanuel said, “I was in Delta State when one of his roommates called me and said he had been knocked down by a police van. I was told that he was coming from the church when the van hit him and the police wanted to reverse their vehicle to make it look as if they were on the right path, but people held them down and forced them to take him to the hospital.

“I got to the emergency ward of the hospital and I was told that he was dead.”

“We are seven in my family and two of us are the only boys. For the past 15 years, he had been doing professional photography and event coverage. He took care of us with the money and use the rest for his education. We want justice and nothing less. We have decided to follow the case legally and not take laws into our own hands.”

Photo: Lagos Based Referee Basit Giwa Dies Of Heart Attack At Lekan Salami Stadium In Ibadan
Drama In Oyingbo As Robber Abandoned By Gang Members Misses His Way After Operation