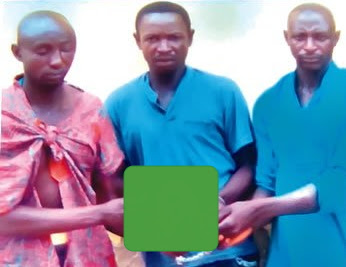 3 brothers on Tuesday told journalists in Ilorin that they killed two women and implicated their elder brother because he had a larger portion of the father’s inheritance.

The siblings, Saidi Amadu, Idris Amadu and Quadri Ayodele, were paraded by the police. The men allegedly murdered a patent medicine dealer, Rohimat Kehinde and her assistant, Fasilat Azeez, at Alapa last month.

They, however, told the police that the crime was committed by their elder brother, Ayodele Adama. Adama was arrested and charged to court and is currently in prison facing trial. Police, however, later discovered the crime was by the trio during further investigations. Some people overheard them boat that they had succeeded in removing the obstacle to their full inheritance.

The Commissioner of Police, Mr. Sam Okaula, said the father of the suspects had left them the inheritance and that Adama got the largest part to the consternation of the others. He said: “We now have the duty of bringing the innocent man out of the prison.”

Okaula said the trio had confessed that their elder brother knew nothing about the crime.