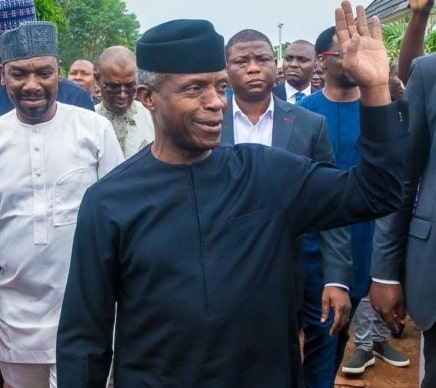 Once again, Vice President Yemi Osinbajo has stirred the hornets’ nest with his postulation that the 2019 presidential election will determine Yoruba’s fate in 2023; saying Yoruba vote for President Muhammadu Buhari in 2019 will automatically position the ethnic nationality to clinch the presidency in 2023: Otherwise, the Yoruba will lose out in the race for the country’s presidency in 2023. Osinbajo has appropriately been answered by many interest groups offended by his starry-eyed postulation. His target appears to be the Igbo ethnic nationality which has been canvassing for the presidency and which seems to have settled its gaze on the same 2023 as the magic year they would realize the ambition to rule Nigeria (again?) under a democratic dispensation.

Osinbajo appears also to have fallen for the bait or deceit of Buharifor- second-term promoters dangling the North’s support in 2023 as carrot to get the support of the Yoruba and or Igbo for Buhari’s re-election bid. Or, better still, Osinbajo has joined the bandwagon of those using 2023 as bait to garner support for Buhari seeing they have no better joker to use in the circumstance.

Having failed to deliver on their election promises; seeing they have frittered the massive goodwill that brought them to power; and with their party hopelessly splintered and the dire consequences of self-immolation staring them in the face, APC leaders have to ingeniously engineer a formula that can divert attention away from their failings and raise issues where they can expect to hold some advantage over their opponents. Assuming the presidency goes South in 2023, should the Yoruba even struggle with the Igbo for it? The proposition, which in itself and by our experience is not infallible, is that Buhari’s second term guarantees that the presidency will rotate to the South in 2023.

This is not cast in iron. To start with, rotational presidency is not a constitutional provision but a gentleman’s agreement within the then ruling party, the PDP. It is too early to say whether APC has such an understanding. From our experience, APC is a party that promises heaven and earth to win elections but makes U-turn afterwards. From experience also, Buhari and his minders are audacious people who rule with impunity.

They are unmindful of public opinion and snub public outcry. They are unrepentantly sectional and nepotistic and nothing suggests they will want to relinquish power in 2023 to the South. In fact, I have heard from usually reliable sources that Buhari has sworn never to hand over power to the South but to another Northerner. So, if this is true and in 2019 as well as in 2023 Buhari and his ilk have their way, power can still remain in the North; Osinbajo and others like him in Igbo land would simply have chased shadows and clutched the wind. Buhari has a reputation for useand dump. He used and dumped those who staged the coup that brought him to power in December 1984; as a result of which those ones had to stage another coup to oust him from power.

In 2015 and before our very eyes, Buhari used Asiwaju Bola Ahmed Tinubu to achieve what he had miserably failed to achieve in three previous attempts and afterwards dumped Tinubu. Buhari only began to warm up to Tinubu again when he found the necessity for it because of his reelection bid. It is, therefore, in Buhari’s character that after using Osinbajo, the mugus and magas in Yoruba and Igbo land to achieve re-election, he will willynilly dump them and follow the dictates of his mind and the wishes of the cabals around him. And this brings us to the place of deceit as a potent weapon of war and political survival. Apart from the element of surprise, deceit is a weapon that power mongers adroitly put to devastating use. Othman dan Fodio employed it against the Hausa kings of Gobir (which the Fulani renamed Sokoto and made the capital of their caliphate). Alfa Alimi used it against Afonja in Ilorin, leading to the loss of that Yoruba town to the Fulani.

The Fulani employed deceit to up-end and conquer their hosts on the way to establishing the Sokoto Caliphate. The offspring of Othman dan Fodio are still in the business of employing this weapon that served their forbears well. I have heard Islamic scholars argue that employing deceit is not a sin or an anathema. For sure I know the Bible records deceit being put to devastating use. In Joshua 9: 3 – 27, the Gibeonites deceived Joshua and God not only allowed the fruit of the deceit to stand but also punished Israel when King Saul violated it (11 Samuel 21: 1- 9). The deceit employed by Othman dan Fodio, Alimi and other Fulani leaders not only stands till today but also explains why the Fulani, despite their few numbers, exercise suzerainty over Nigeria.

Nigerians, beware that you are not deceived again! When God decided it was time to destroy sinful King Ahab, Prophet Michaiah told us what God employed in 1 Kings 22: 1 – 37. I make bold to say that deceit and lies have their place in human affairs. When vengeance-seeking Tamar employed deceit to unhinge her father-inlaw Judah, she not only escaped punishment but was also saluted by Judah as being “more righteous than I” (Genesis 38: 1 – 26). Nigerians, shine your eyes! If you get deceived on 2019 or 2023, it is going to be your fault.

It can only mean they are smarter than you! Other than playing smart, there is no reason Osinbajo should be coating his selfish agenda as Yoruba interest and attempting to shove it down our throat. For one, the Yoruba’s core interest is not who becomes president either in 2019 or 2023 but that the country be restructured in such a way that the nationalities will take their destiny in their own hands, be liberated from debasing internal colonialismand the choking malfeasance of domineering feudalists; so as to bring to an inglorious termination the pompous grandstanding of those making this country to not only look but also act “big for nothing” (apologies, Major Kaduna Nzeogwu). Osinbajo has pooh hoed restructuring.

His party has denied it before returning to speak on it from both sides of the mouth. Two: Experience has shown that there is really nothing substantial gained by the region whose son or daughter holds leadership positions in this country. Despite that the North has dominated political power since Independence; the region remains the poorest in Nigeria. Despite that resources got from the South have been poured into the North, pillaging the South to the North’s benefit or, in biblical terms, robbing Peter to pay Paul, the North still wallows in the quagmire of poverty and squalor. At best, only a few members of the ruling class corner the wealth and resources that should have served an entire people.

Three: While it is true to a great extent that Northern leaders attract development projects to their region, even far beyond what is their legitimate due, the same cannot be said of their fawning and timid Southern counterparts. Can Osinbajo tell us what development he has attracted to the same Yoruba land whose favour he now curries? Yet, he has been VP – and acting president on a few occasions – in the past three years! Olusegun Obasanjo was president for eight years; yet, he did not tar any of the roads leading to his home state of Ogun. He also left all roads in Yoruba land, including the Lagos–Ibadan expressway, in tatters. Usually, only a few classmates, friends and village mates benefit from those so-called leaders after they must have climbed on our back to power, like Osinbajo is trying to do now.

Yoruba are too cosmopolitan to be reduced to the Gibeonites referred to above. Oh no! Osinbajo will not reduce the Yoruba to hewers of woods and fetchers of water or to a Lazarus picking crumbs from underneath the master’s table. Osinbajo ought to know that we know he is gunning to be president in 2023. Like they did to MKO Abiola, they have deceived Osinbajo that the Fulani will hand over to him in 2023. But we also know that the same deceit has been sold to his erstwhile mentor, Tinubu, as well as to super-Minister and ex-Lagos governor, Babatunde Raji Fashola. This is not to mention that the same 2023 presidential kite of deceit has also been flown all over Igbo land. Shine your eyes, O Nigerians!