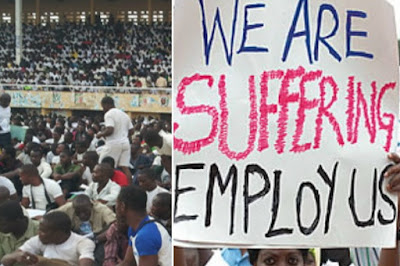 January 8, 2018 – A Country That Can’t Provide Jobs For Young Citizens Is Virtually At War Against The Future

January is a special month for Nigeria. It is even more special than October when Nigeria gained her independence. It is often assumed that when the night falls on December 31, there is something new happening by dawn. January 1 seems to open a new vista. On January 1, 1984, following the military coup announced on December 31, people in Akure, like in other parts of Nigeria, were greeting themselves: Happy New Year! Happy New Government!

In the night of December 31, 1983, President Shehu Shagari was at Aguda House in the Abuja, the new Federal capital, where he was to spend the New Year. Then they brought the news that the military was stirring and that a coup was in the offing. He quickly gathered a small entourage and fled. The military later got him on a farm in Nasarawa. The Second Republic had ended and Shagari was brought to Lagos to face a long detention in a Federal Government guest house in Ikoyi. By January 1, Nigerians learnt that the new Head of State was a lanky soldier, Major-General Muhammadu Buhari. It was a watershed in history as the three men who were involved in the coup were to become our rulers in succession. General Ibrahim Babangida, the Buhari’s Chief of Army Staff, was soon to supplant his chief and General Sani Abacha became Babangida Chief of Army Staff. Some years later Abacha took his turn.

January is the first month in the Gregorian calendar. It is named in honour of the two-faced Roman god, Janus. The month looks into the old year and the new year and there is a palpable feeling of newness when it arrives. In the old days in the Okemesi, Ekiti State, the harmattan haze would cover the mountain when we huddle together in the cold. You could see the mist as if the celestial beings are hovering in the horizons and even the wind, its menacing howling with sepulchral presence, fill one with dread. In the preceding December, that is when the Ogun festival is held when the Kabiyesi would dance round the town, calling at several ancient stations, to honour the Old Ones who have been the guardian spirits of Okemesi since the First Dawn.

But even for Nigeria, the Guardian Spirit is often on extra duty in January. On January 13, 1970, then Colonel Olusegun Obasanjo concluded the Nigerian Civil War when he received the surrender of the Biafran High Command on the battle field. The Biafran leader, General Chukwuemeka Odumegwu-Ojukwu, had gone into exile “in search of peace.” His successor, General Phillip Effiong had negotiated the surrender with Obasanjo. After the surrender, Obasanjo made a broadcast on Radio Biafra on January 14, 1970, declaring to all that the war was over and everyone should return “to his or her normal place of abode.” After the broadcast, the radio station played the Nigerian National Anthem and announced that “this is Radio Nigeria, Obodo Ukwu!”

I sometimes wonder if there would have been the Civil War in the first place if events had taken a different turn in January 1967. On January 4, 1967, Nigerian leaders met in Aburi, Ghana, on the invitation of the Ghanaian military ruler, General J.A Ankrah, who decided to intervene in the roiling crisis in Nigeria. Ojukwu, since the assassination of General J.T.U Aguiyi-Ironsi, Nigerian first military ruler and Colonel Francis Adekunle Fajuyi, the first military governor of the West, had refused to have any direct dealing with his colleagues in Lagos. It was Ironsi who appointed Ojukwu military governor of the East along with Fajuyi, (West), David Ejoor, (Mid-West) and Hassan Usman Katsina, (North). To break the logjam, Ankrah decided to invite the soldiers to Ghana.

They met in Aburi, a presidential retreat that was built by Kwame Nkrumah, the first President of Ghana. The meeting was a total victory for Ojukwu who appeared fully prepared for the meeting while the others were treating it as an Officers Mess affair. Ankrah, who presided, virtually used the agenda suggested by Ojukwu. The Easterners were the aggrieved party and the others felt they needed to be appeased considering the wide-spread killings that had occurred in many cities of the North especially after the assassination of Ironsi and Fajuyi.

Top civil servants who accompanied Gowon to the meeting were sad about the outcome. The meeting agreed that each of the military governors should have control over the army area command in its region. The appointment of top civil servants, federal judges, ambassadors and other top officials of the Federal Government must be done with the concurrence of the governors. All past decrees that strengthened the powers of the Federal Government at the expense of the regions were to be repealed. The Head of State was now to be known as the Commander in Chief and not the Supreme Commander as was the case under Ironsi. Gowon conceded every point. The meeting agreed that as soon as the members reach Nigeria, a meeting of the Supreme Military Council would be called to ratify the decisions of the meeting and pass a decree to codify it. When the meeting broke up January 5, Ojukwu, who had recorded the proceedings on tape, was exultant.

But the meeting also agreed Lagos would release details of the meeting and the decisions to the public. When Lagos would not release the details on time, Enugu released its own version of the proceedings and decisions. Gowon countered it when Lagos released another version of the Aburi report. A meeting of the SMC was called to be hosted by the Governor of the Mid-West, Colonel David Ejoor. Ojukwu had refused to attend any meeting in Lagos, citing security concerns. But he agreed to come to Benin. It was also suspected that he was in constant touch with Ejoor who had many Mid-West Igbo in the Mid-West military command. Indeed, few days to the Benin meeting of the SMC, Ojukwu was reported to have visited Benin. He flew in an helicopter painted in the new Biafran colour.

The Benin meeting, held at the Nigerian Institute for Oil Palm Research, NIFOR, was a turning point. The governors, Ejoor, Hassan, Adebayo and other members of the SMC were present. The other members were Commodore Edet Akinwale Wey, the head of the Navy, Alhaji Kam Selem, the Inspector General of Police, his deputy, Mr. T. Omobare and the Secretary to the Federal Government, Mr. H.A. Ejueyitchie. The leaders and Gowon waited in vain for Ojukwu to turn up. He did not. The meeting therefore treated his absence as routine and proceeded with the meeting, claiming a proper quorum had been formed.

With the absence of Ojukwu, the Benin meeting reversed most of the Aburi decisions. It rejected the idea that any of the region had the right to pull out of the Federation. It also returns the power to declare a State of Emergency to the Federal Government. What came out of the these decisions was Decree 8 which spelt out the relationship between the regions and the Federal Government. Ojukwu rejected it. Gowon followed it up with the splitting of the four regions into 12 states. The old Eastern Region was split to three states: East Central, South East and Rivers. Ojukwu rejected the new structure. Ojukwu proclaimed the independent Republic of Biafra, claiming that he derived powers to do so from the Peoples Assembly of the old Eastern Region. The result was war and for 30 desperate months, Nigerians were feeding the insatiable god of death. When the war ended in January 1970, one million people were dead.

Now we are in January again, the month of new beginning and enduring cold and harmattan haze. There is a new kind of war that has happened upon us and when the harmattan lifts it would still be with us like the whao! Whao! Whao! Of the big men sirens. For the first time since independence in 1960, virtually the entire resources of the republic are being spent to pay public servants and politicians. Not that all the governors are helpless. One of them is busy building statues of his idols. Another is planting infrastructures in the stomach of his citizens every Christmas and Christmas comes only once a year. Unemployment that was once regarded as an epidemic is not accepted as an inevitable pandemic.

For most governors and other leaders, the serious problem of unemployment is left in abeyance until the next elections when the able-bodied men and women are hired to attend rallies in those cheap tee-shirts imported from China. The republic that cannot provide employment for its young citizens is virtually at war against the future. This is not the ingredient of hope. Indeed it is the raw material for despair and it is a bitter war by starvation. And January is supposed to open the door of hope. Our leaders should make a New Year Resolution to keep the door of hope open, for a land where the youths are hopeless, is a land of desperation and cheap death.

Continue Reading
You may also like...
Related Topics:citizen, country, job