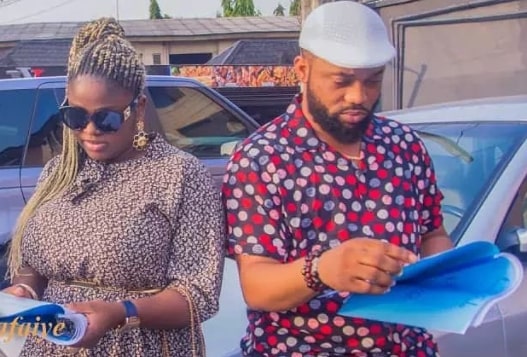 Movie director Damola Olatunji, has been tagged a lazy husband. The father of two who fathered children with his colleague Bukola Awoyemi has reportedly stopped carrying out his  financial obligations to the actress and her two children.

The actor who allegedly enjoys showing off cute face in public is reportedly unable to care for his family. Most of his responsibilities are allegedly being shouldered by Bukola, who has tried her best to ensure her husband changes for good but to no avail. THEWILL gathered that the couple’s relatives have allegedly tried to intervene, but their efforts have yielded little or no results.

One of the reasons the actor allegedly gives for his financial incapability is the fact that good movie roles have not been coming his way like before. Some of his wife’s friends have allegedly advised her to quit the marriage and move on for good, but the mother of two insists on staying. She has taken solace in God and the fact that things would turn around for her husband in no distant time. One reason why she has remained adamant is the fact that she is not Damola’s first wife. She was once accused of snatching the actor from his former wife, Raliat who is based in the United Kingdom.

Many frowned at their relationship when they started dating because Damola was already married to Raliat at that time. Although the marriage took place in 2013, the couple did not enjoy their marriage before things fell apart the following year after Bukola got pregnant with Damola’s child. It was in the same year Damola and Bukola met. The two played a romantic role in a movie which kick started their relationship. Their union is blessed with a set of twins, a boy and girl.