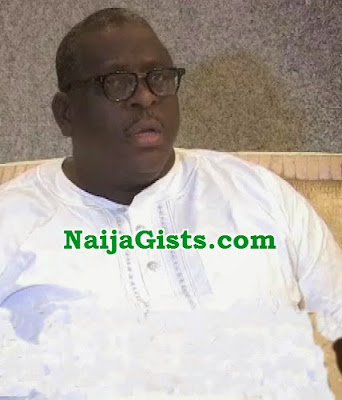 Prince Buruji Kashamu who is currently facing extradition to the United State for drug related offence dated back to the early 90s is now enmeshed in another fraudulent land acquisition mess.

The embattled senator-elect has been accused of forging documents for a landed property worth billions of naira in Ajah area of Lagos state, Southwest, Nigeria.

Kashamu has been challenged by the family of Late Chief Ambali Bakare for fraudulently converting about 300 acres land in the Ogombo area of the state.

The family, led by Shafiudeen Bakare, stormed Nigeria Union of Journalists (NUJ) Iwe Irohin, Press Centre, Oke Ilewo, Abeokuta and disclosed that the family had all documents and will drag the senator-elect to court on the issue.

According to him, “we are here to speak to the world on the fraudulent purchase of our land at Ajah by Buruji Kashamu under the business name of Bukas Kasmal International Ltd. We have been deprived of this land, and we have come to raise alarm.

“When some of those who purchased the land took him to court, the court ruled that we, the original owners should be in court and not a third party. So, we have been making arrangements to revisit the case by heading for the courts to get justice,” the family spokesperson disclosed.

Bakare, who was accompanied by Prince Tajudeen Bakare said a proof of evidence, copy which was given to newsmen indicated that Buruji’s company and others had fraudulently acquired a section of the property sometimes in 2008.

“Some of those whose section of the land was encroached took the matter up, but, unfortunately at the court, it was ruled that the plaintiffs could not take the defendant to court, hence, three years after, we are set to revisit the matter,” Bakare posited.