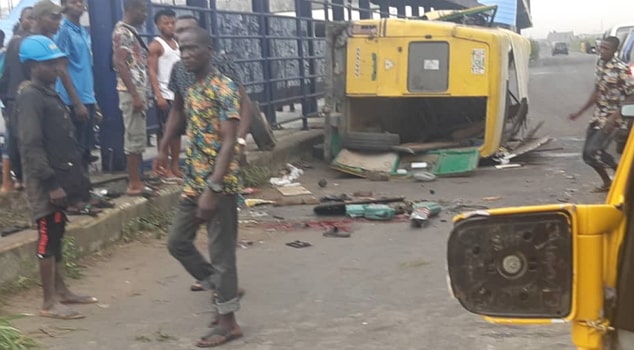 3 Killed In As Bus Crashed Near Alakija, Festac Lagos

At least 3 people died this morning and many others injured in a bus crash that happened along the popular Lagos Badagry Expressway.

According to eyewitnesses, a 30-seater bus crashed into a median at Oluti Bus Stop near Alakija Festac Lagos at exactly 11:30am.

A motorcyclist who witnessed the crash, Usman Dada, said the coaster driver in a bid to harass the ill-fated bus  swerved towards it, forcing the latter to skid to the other lane.

“Unfortunately, the minibus jumped into the BRT lane, hit the pavement and turned back. It tumbled twice and scattered. The door fell on one side, all the glasses broke, in fact, the bus became pieces

“The driver and two passengers in front died instantly. Their heads were cut open. Some people broke their legs and waist.

“It was the impatience of the minibus driver that caused that accident. It was bad.

‘’The conductor and others who could jump off while those who could not come out by themselves were helped out and taken to the hospital,” he said.

The accident caused traffic lockdown in the axis such that it took the combined efforts of Federal Road Safety Commission (FRSC), police, army and naval officials to clear the road.

As of 1pm, some body parts were still off the road while bloodstains and other belongings of victims were seen at the accident spot.