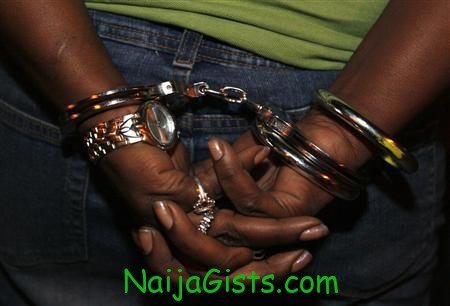 A business woman, Mrs. Folashade Giwa is now counting her losses after she was made to part with about N2.7m for deliverance by a Lagos based prophetess, Christiana Ajibola, 60. naijagists.com

The prophetess whose church is located at 36, Odewale Street, Alagbado, Lagos State, southwest Nigeria, has been taken to Ojokoro magistrate’s court for fraud and stealing.

Apart from allegedly defrauding Giwa to the amount, the prophetess also initiated her to serve a godless which the police described in the charge sheet as a man-made-god.

We gathered that Giwa had gone to the prophet to seek prayers for the fruit of the womb.

The prophetess told her that before she could bear a child, she will undergo deliverance and she will be purified.

We learnt that the prophetess also told her that the currency she pays will determine how speedily her prayer will be answered.

The woman paid in pounds sterling and dollars so that she could have her own child.

The prophetess reportedly took her and initiated her into a man-made god and placed her under several oaths that she should not tell to anyone about her experience.

When her desire to have a child did not materialized as the prophet promised, failed and she could not get her money back, she went to Alagbado police station and reported what transpired. The prophetess was arrested and charged to court.

She pleaded not guilty. The presiding magistrate, Mrs. A.F. Adeeyo granted her bail in the sum of N500,000 with two sureties in like sum.

The matter has been adjourned till 21 February, 2012 for hearing.