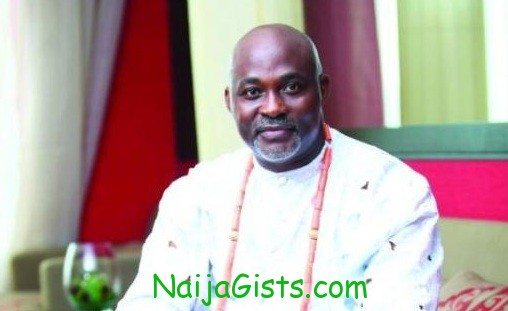 Before the news of his sudden death starts circulating, Nigerian actor Richard Mofe Damijo has debunked the rumours stating he is not dead.

The Talented Nollywood actor and Commissioner for Tourism and Culture in Delta State has issued a statement, debunking rumours that he died in a car crash near Abraka, Delta State on Tuesday. naijagists.com

Richard Mofe Damijo said his driver was still in a critical condition and sought the prayers of his fans and well-wishers for his wuick recovery. He indicated that a vehicle rammed into his Toyota Prado jeep but that he did not know their current state.

The statement reads, “Hi my name is Richard Mofe-Damijo and contrary to d rumours yesterday that I was in a coma, unconscious n even dead, I am ALIVE and WELL. God kept us (my driver n I) alive by His hands.

“This is to say thank u and a big God bless u all for the prayers and well wishes especially those expressed towards my driver following the accident yesterday in delta state. I am very ok but my driver is still in a critical condition. Pls keep him in ur prayers. We are believing God to arise on his behalf and restore him to full health.

“As for the guys who rammed into us I ve no idea where they are but we pray for them too… It is well.

“Once again thank u. By the way I hear the whole thing went VIRAL. I believe dts d word. Am learning fast:)… Wetin dis social media be na only God know. Anyways I de like tree wey God plant. No le le. No shakes. My special Oga wey put me for “hospital arrest” plenty migwo. My president Segun Eye rinze sorry Arinze well done. Until my next BC pls keep believing in God oo. Nuff said.”

Woman Pays Prophetess N2.7m For Deliverance
Story of The Day: Dating A Nigerian and Proud Of It