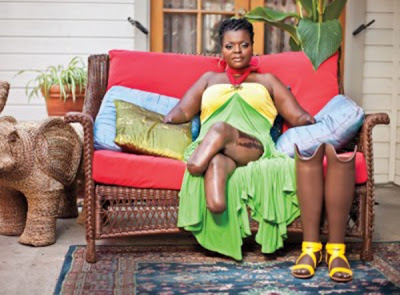 Apryl Michelle Brown, a subject of constant teasing by friends and family on her flat booty had suffered insecurity for years. naijagists.com

To feel better, she promises herself to buy a better backside.

“I didn’t know if I wanted to look like Janet Jackson or J. Lo,” the Los
Angeles cosmetologist, 46, says in an exclusive interview featured in
the November issue of ESSENCE magazine. “I just wanted a new, bigger
booty.”

In 2004, her quest for a better backside almost killed her.

According to her, she paid an unlicensed person to do buttocks injection for her. She couldn’t recall if she paid $500 or $1000 for the industrial-grade silicone injection.

In early 2006, the silicone had hardened causing serious pain and infection which resulted in a life-saving amputation of her limbs in 2011.

Now adjusting to her new life with prosthetics, Brown shares her story — and her warning for others tempted to check out “pumping parties” — with writer Amy Elisa Keith in ESSENCE. “I was left here for a purpose,” she says. “I have to get the word out so that nobody else falls commit the same mistake.”