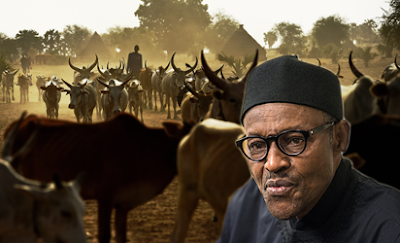 CAN Blames Buhari’s Inaction For Mindless Killings By Fulani Herdsmen, Says They Have Killed More People Than Boko Haram

The Nigerian Federal Government came under fire from the Christian Association of Nigeria (CAN) yesterday over the series of attacks by Fulani herdsman on farmers around the country.

CAN President, Rev. Samson Ayokunle, said the government was not serious about putting an end to the crisis.

Ayokunle who reacted to the killings by the Fulani herdsman through a statement he issued in Abuja, said government should act decisively before it becomes a national war.

He said the Buhari government had failed to uphold the constitution which it swore to uphold “because they have failed in protecting Nigerians from the attacks of Fulani Herdsmen in the affected areas.

“If they continue to allow Fulani herdsmen to be having a field day in killing people like this, is it not the Fulani alone that would remain that they would be governing? God forbid.”

“There is the need for the government to act decisively on the rampaging Fulani herdsmen before it becomes a national war.

“We in the Christian Association of Nigeria (CAN) are forced to make this press release on the continuous inhuman and wicked activities of Fulani herdsmen all over the federation who are going from community to community killing innocent farmers with impunity.

“While the government has taken the battle to Boko Haram terrorists, the Indigenous People of Biafra, the Badoo boys, the Niger Delta Avengers and other groups, the government has not shown any serious willingness to checkmate the murderous Fulani Herdsmen. This to us is a betrayal of the confidence reposed in this government by Nigerians when they voted them into power.

“We need to know why the intelligence units of all security apparatus we have in this country has not been able to discover the sources of supply of ammunition to Fulani herdsmen living virtually in the bush.

“The Customs and the Immigration services together with the Police have case to answer. Who are the suppliers of these weapons?

“If the murderous herdsmen are foreigners, as it is being claimed in some quarters, why did we allow dangerous foreigners into our country to come and kill us? Our government has a case to answer too.

“We are therefore tasking the government of the day; the Executive, the Senate, the House of Representatives and all security agencies to rise up to their responsibilities, and we equally call on all stake holders in this nation together for a solemn assembly that would address all these things and come out with lasting solution to these senseless attacks.

“The international community cannot afford to be watching us without lending a voice to our cries to our government to checkmate the murderous Fulani herdsmen who appear not to care about the future of this nation.

The Christian Association of Nigeria (CAN) is further appealing to the international community to come to our aid by providing relief for many in the hospitals and those that are displaced as a result of these attacks.

“We urge all churches to set aside time this coming Sunday, January 7, to pray for Nigeria and for victory over the wicked killings of Fulani Herdsmen.

Our nation can never be great in a state of insecurity and war as we are presently experiencing it. This government owes the entire Nigerians the responsibility of competent action, not just action by words of mouth.”

Also, the Christian Association of Nigeria (CAN) in the 19 Northern States and Abuja condemned the attacks as did Governor Samuel Ortom of Benue State who vowed that no amount of intimidation from any quarters would stop the implementation of the law prohibiting open grazing in the state.

Continue Reading
You may also like...
Related Topics:Buhari, CAN, Fulani, herdsmen, nigeria