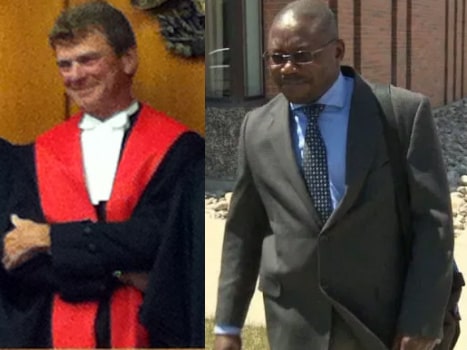 A judge in the Province of Alberta Canada is now facing accusation of racism for mocking the accent of Dr. Bamidele Adeagbo, a medical expert from Nigeria who testified during a trial, according to the CBC and the Montreal Gazette.

Forty-two legal, educational and medical professionals across Alberta have united to request an investigation from the Canadian Judicial Council (CJC) into language used by Justice Terry Clackson during a trial for two individuals who were accused of murdering their son.

“We are of the view that Justice Clackson acted discriminatorily,” the complaint reads in part. “Some may perceive racism.”

The trial in Lethbridge, Alberta was the second for David and Collet Stephan, who were being tried for charges connected to the 2012 death of their 19 month old son Ezekiel. Instead of taking Ezekiel to a doctor immediately, the Crown accused, the two treated his bacterial meningitis with naturopathic medicine.

Dr Bamidele Adeagbo: mocked by the Canadian judge over his Nigerian accented English

When Ezekiel died, the crown charged them with failing to provide the necessaries of life, having delayed to bring him to the hospital for treatment. They were already convicted in 2016 by a trial in Lethbridge—the Alberta Court of Appeals upheld this verdict, though the Canadian Supreme Court found that the judge had erred in his instructions to the jury.

The expert witness for the defense, Dr. Anny Sauvageau, argued that Ezekiel’s viral meningitis was not the cause of his death. Instead, she blamed a lack of oxygen for his passing. However, Crown expert Dr. Bamidele Adeagbo, a forensic pathologist who autopsied Ezekiel, testified that the child had bacterial meningitis and a lung infection, the former of which contributed to his death.

Justice Clackson accepted Sauvageau’s testimony over Adeagbo’s, saying it was impossible to charge the Stephens with killing their son.

In his verdict, Clackson spent a full paragraph complaining about Adeagbo’s thick Nigerian accent while summarizing concerns the defense expressed about his level of expertise as a witness. But his own concerns were grammatical.

“His ability to articulate his thoughts in an understandable fashion was severely compromised by: his garbled enunciation; his failure to use appropriate endings for plurals and past tenses; his failure to use the appropriate definite and indefinite articles; his repeated emphasis of the wrong syllables; dropping his Hs; mispronouncing his vowels; and the speed of his responses,” Clackson wrote.

“Justice Clackson harshly mocked Dr. Adeagbo’s manner of speech and accented English, and thereby inappropriately implicated his national or ethnic origin as a person of African roots,” the letter sent to the CJC said.

“It is hard to imagine that if Dr. Adeagbo, who is of African origin, had spoken in a typically American, Australian, British, or other more familiar accent, Justice Clackson would have been so scathing,” it continued.

The letter goes on to say that Clackson may have given Dr. Adeagbo’s words less weight because of these presumed speech problems, and note that Clackson made no reference to the thick French-Canadian accent of Dr. Sauvageau.

The Alberta Crown Prosecution Service has not announced whether or not they plan to appeal Clackson’s verdict. A spokesperson for Alberta’s Court of Queen’s Bench said that the court is “aware” of the complaint.