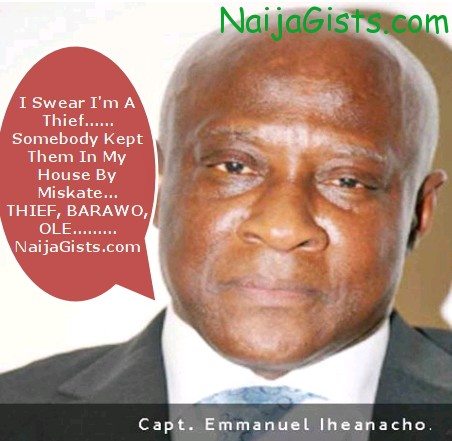 The arrest of former Minister of Interior, Captain Emmanuel Iheanacho, for alleged theft of petroleum products is the latest talks in town. naijagists.com

He got into the mess when security operatives traced some stolen petroleum products as well as vessels hijacked by pirates to his company premises, Integrated Oil and Gas Limited in Apapa, a suburb of Lagos.

Captain Emmanuel Iheanacho’s arrest is a major blow to the organized syndicate stealing petroleum products in the Niger Delta region.

His arrest could lead to the arrest of other suspected masterminds of oil thefts and piracy on the nation’s waterways. The Nigerian Maritime and Safety Administration, NIMASA, should not relent in pulling the rug off the feet of the big thieves sabotaging the economy of this country.

Though Iheanacho claims that his arrest was a smear campaign by some people to destroy him and take over his business, there are pertinent questions he has to answer: if he had nothing to do with the hijacked vessel and the stolen petroleum products, why were they kept in his premises? When he saw the incriminating items, why did he not alert security agencies about them? This matter should not be swept under the carpet because a high profile person is involved. It should be thoroughly investigated to bring all the culprits to book.

Security agencies should be more alive to their responsibilities to curb oil thefts and piracy off Nigeria’s coast which has become very alarming. Were it not for the painstaking efforts of NIMASA and Global West Vessels Specialists, a vessel, M.T. Grace conveying suspected stolen refined petroleum products could not have been intercepted.

The discovery that highly placed individuals are part of the syndicate involved in oil thefts and piracy in the Niger Delta region and off Nigeria’s coast confirms suspicions that the oil thieves are mere errand boys while the real thieves are influential elites who act behind the scene.

There were reports in the past that a former governor in the southsouth was deeply involved in oil bunkering or theft and that his boys are still very much involved in this economic sabotage. Security forces must continue to find and destroy illegal refineries and vessels used for stealing petroleum products until their activities are crippled. Iheanacho should be made a scapegoat to serve as a deterrent to others.(pmreports)