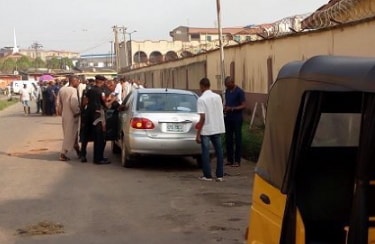 Awalu Ibrahim, a 32-year-old motorist whose truck’s tyre removed on motion and knocked down a pedestrian, was on Monday brought before an Ikeja Chief Magistrates’ Court.

The accused driver, who resides in Katsina State, is facing a three-count charge bordering on reckless driving and manslaughter.

Insp. Clifford Ogu, the Police Prosecutor, told the court that the offences were committed on April 22 on Akilo Road, Ogba in Lagos.

Ogu alleged that the accused drove his truck recklessly and in the process, one of the tyres unscrewed itself on motion and hit the complainant, Mr Sikiru Lawal, and broke his legs.

“The complainant was on his way home when one of the right tyres of the truck, driven by the accused, removed while on high speed and knocked Lawal into the gutter.

“The accused was about to run away when some passersby apprehended him,’’ the prosecutor said.

The Chief Magistrate, Mr J.A. Adegun, granted the accused N100, 000 bail with two sureties in like sum and adjourned the case until May 16. [NAN]