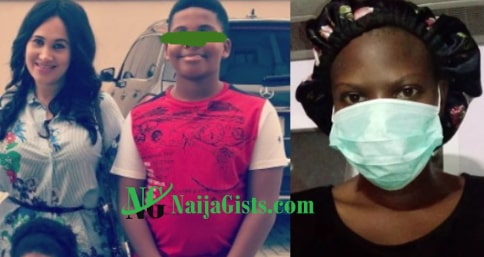 Nollywood Actress, Caroline Danjuma, has fired her mad who tested positive for the coronavirus .

The worker in question, Oyindamola Alexander, was treated of the disease at the Lagos isolation centre in Onikan and was discharged on April 20.

She alleged that Caroline’s son first tested positive for COVID-19 before she did, an allegation which the actress refutes.

Oyindamola, a graduate of English and Literary Studies from the University of Ado Ekiti, was hired by Caroline on March 11, 2020.

She claimed she was hired to supervise the cleaner, washer man, driver and cook.

Oyindamola told PUNCH that Caroline’s 11-year-old son returned to the country from the United Kingdom and began showing symptoms of COVID-19.

Officials of the Nigeria Centre for Disease Control (NCDC) were contacted, she said, and the boy was tested and confirmed positive.

The domestic worker said Caroline’s son arrived from London a few days after her boss gave her some money.

“A week to the lockdown, she asked if I had money for my family to stock up food. My parents are in Ekiti and my husband is in Benin, though we have some misunderstanding,” she said.

“I told her that I had yet to send money to them, but I believe that they would cope somehow. She said she would give me some money to help them. She then gave me N30,000 for which I was grateful. She never said it was my salary.”

Oyindamola, 33, added that all workers in the house were tested except the cook.

She said that after she went into isolation, she contacted her boss to pay her but “my boss started abusing me. She said what about the N30,000 she gave me when I had not even started working. She said the money was my salary for the month.

“She said she had been feeding me and my attitude was unbecoming, and as a matter of fact, I was no longer working with her and that I deserved what I was going through. She asked if she was the one who impregnated me.”

Oyindamola said her bed at the isolation centre was beside that of the cleaner, who also tested positive for COVID-19.

Days later, she said her boss called, paid them and fired her.

“She sent me N23,000 and N50,000 to the cleaner. She had apparently removed the N30,000 she gave me initially and the N7,000 she said was a refund for my missing money. She said I lied that my money was stolen,” she said, adding that two days later, she got a WhatsApp message from Caroline that her laptop was missing.

Oyindamola said the actress has since been threatening to get her arrested.

Caroline, however, in a text message sent to Oyindamola said the domestic worker got infected after going out of the house without permission.

The actress also told PUNCH that she fired Oyindamola for attempting to extort her.

She claimed that Oyindamola’s overbearing attitude made two domestic workers leave the house and that the other domestic worker tested positive for the virus because she and Oyindamola shared a room together.

Caroline said no member of her family tested positive for coronavirus.

“Oyin does not work in the house. She orders people around. She is rude. I just cannot stay with her. She is not the only one working for me. I still have others. All others are still working for me and I am paying them,” she said.

The actress wondered why Oyindamola would think the money given to her was a gift.

She said her children returned to the country on March 23 and that she immediately isolated them and had everyone tested.

Caroline said she kept in touch with Oyindamola while the domestic worker was in isolation.

“She stayed in the main house and shared a room with the other girl. I was calling to check up on her and pray with her while in isolation. Then one day, she called and said she wanted to be paid. And I blasted her. And before you know it, she said she contracted COVID-19 in my house,” she said.