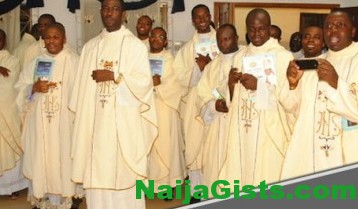 October 17, 2017 – Catholic Priest Escapes As Kidnappers Sleep Off After Drinking Holy Communion Wine They Stole From His House

More details have emerged on the miraculous escape of Reverend Father Nwanja Timothy who was kidnapped by some gunmen in Ezza North LGA of the state on Sunday around 8:30pm.

According to church sources, Rev. Nwanja escaped when his kidnappers allegedly drank the Holy Communion wine they stole from his house during his abduction and fell into a deep state of sleep.

On sighting that his kidnappers had been knocked out by the impact of the Holy Communion wine, the cleric jumped out through the window of the uncompleted building where he was kept.

The criminal gang were planning to request a whopping sum of N100million as ransom from the Bishop of Abakaliki Diocese in the morning before they ran out of luck.

The police later raided their hideout where one of the 3 criminals was arrested as two others fled.