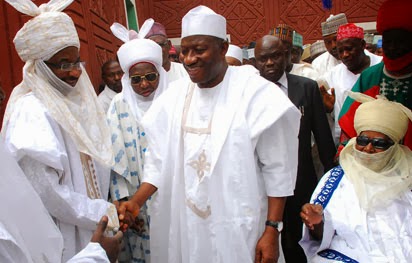 The Emir Of Kano Ado Bayero has spoken up over the sudden suspension of Mallam Sanusi Lamido, the now ex-Governor of the Central Bank Of Nigeria.

The Kano Emirate said Sanusi is under persecution for exposing the corruption that is going on in NNPC. Bayero warned Jonathan to treat all Nigerians with fairness and equality.

The letter titled“Suspension of CBN Governor: Abuse on the Rule of Law”, reads:

“As the President has suspended the Governor without the recourse to the rule of law, we believed it was a deliberate attempt to witch-hunt him and desperation and impunity at the highest order by the Federal Government.

“We and many see the President’s action as a deliberate witch-hunt of the Governor for doing his job by letting Nigerians know the alleged fraud going on in the petroleum industry and to divert people’s attention from this monumental fraud.

“Despite all the awards and commendations the Governor received nationally and internationally, which Nigerians and even the President are proud of, the significant positive changes to the economy, confidence in depositor’s money and dynamic banking reforms, but it’s unfortunate the Governor will be paid back this way.”