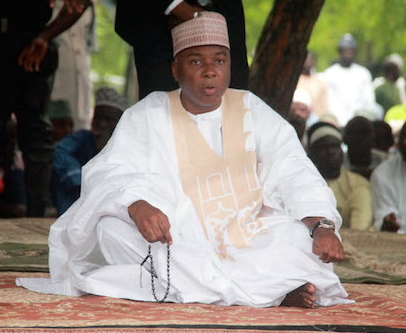 The Code of Conduct Tribunal, CCT, sitting in Abuja has ordered the Nigeria Police and other relevant security agencies in ‎the country to arrest the Senate President, Dr. Bukola Saraki.

In a ruling earlier today, the tribunal headed by Justice Danladi Umar issued a bench warrant against Saraki following what it said is  his refusal to appear in court to face a 13-count criminal charge that was preferred against him by the Federal Ministry of Justice.

FG had through a deputy director in the office of the Attorney General of the Federation, Mr. M.S. Hassan, asked the tribunal to order Saraki’s arrest.

Saraki who was billed for arraignment this morning, sent his team of lawyers to serve the tribunal with a copy of the ruling of Justice Ahmed Mohammed of the Abuja Division of the Federal High Court, yesterday, which summoned the Ministry of Justice to appear on Monday to show cause why the trial should be allowed to proceed.

Equally summoned by the court were the Chairman of the tribunal, Justice Danladi Umar and that of the Code of Conduct Bureau, CCB, Mr. Sam Saba, as well as Mr. Hassan who signed the charge against Saraki.

Meanwhile, irked by Saraki’s absence at the tribunal for the commencement of his prosecution over alleged false declaration of assets, the Ministry of Justice prayed the Justice Umar-led panel to order for his arrest, saying “he cannot sit in the comfort of his chamber and object to his trial in absentia”.

The prosecution further maintained that Justice Mohammed lacked the powers to summon ‎the CCT and CCB chairmen, even as it accused Saraki of engaging in “forum shopping” in a desperate bid to scuttle his trial.

Meanwhile, Saraki has through his lawyer, begged the tribunal to consider his position as the Senate President and stay the execution of the arrest warrant, saying he would be available for trial on Monday.

His plea was refused by Justice Umar who maintained that the accused person, having sworn to protect the constitution, ought to have shown respect to the tribunal by appearing before it today.

Continue Reading
You may also like...
Related Topics:arrested, president saraki