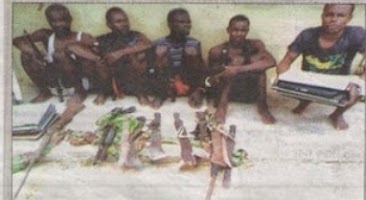 A notorious armed robber from Chad has been arrested in Lagos.

The youngster said he gets the confidence to rob after a ritual involving drinking of cow blood before any operation.

Others arrested with him were Abubakar Sala, Ahmed Mohammed, Umaru Abubakar while their leader Mohammed Abubakar who was reportedly killed during gun battle with police.

According to Nasiru, “I drink raw cow blood which enhances my morale and gives me confidence and spiritual power, any time I want to go for any robbery operation.”

On how he came to Nigeria, Nasiru said he came to Nigeria through a popular Islamic scholar who employed him as night guard. He said he worked for him for several months but was not paid his salary so he decided to find another means of survival

He said what came to his mind was robbery and he did not waste time to contact his friend, Umaru Abubaka who introduced him to other members of the gang who initiated him.

He said initially Abubakar, did not tell him the nature of the work, but he knew he was a criminal. “One day, he asked me to follow him to Kara market in Ogun state where I realized that he was into armed robbery business,” Nasiru said.

He said since then, he became active and was involved in several robbery operation within Lagos and Ogun states axis.

The suspects were arrested by SARS after the killing of a security guard on 11 May 2014 at No.7 Jamiu Olotu Street, Isheri Magodo area, Lagos.

Nasiru confessed, that the late chief Security officer (CSO) of the Omole Estate was their gang leader who recruited and provided them with arms for their robbery operations.

Nasiru said they usually operated on Lagos-Ibadan Expressway where they robbed travellers at gunpoint and snatch expensive cars from their owners. Nasiru further said the cars were taken across border to sell.

The suspects blamed lack of parental care for their involvement in robbery.