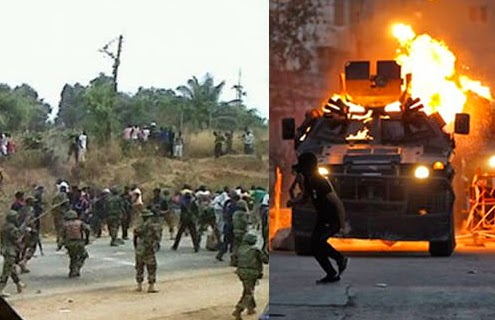 An unidentified army colonel has been arrested along with some junior officers after fleeing from Boko Haram Jihadists in Borno state. The colonel was commanding a team of 3 Armoured Personnel Carriers and ground troops between Gulak and Madagali when he ordered the troops to set the APCs on fire and run into the bush to escape from Boko Haram terrorists approaching them.

There was no justifiable reason for the action as the APCs have the firing power of 1.5kilometres or even more, and they ought to have outgunned the poorly equipped Boko Haram terrorists approaching nearby in six Hilux vehicles. With the APCs burnt, the officer reportedly led his men to escape into the bush. Saturday Vanguard, which reported this story said the Army authorities were outraged over the development and ordered the arrest of both the commander, the junior officers as well as the soldiers under his command.

Military sources who spoke with the newspaper deemed the action ‘’embarrassing’’ and a setback to the military push in the area.

Until then, the paper repoted, “the Special Forces of the Nigerian Army who commenced the putsch to rout Boko Haram terrorists from Bazza, Michika, Gulak and Madagali from Vimtim, had successfully dealt with, and inflicted heavy casualties on the terrorists up till Gulak”.

The Colonel was said to have been informed about the approaching Boko Haram militants.

“However, rather than blasting and taking out the terrorists in their pick-up vans; he ordered his soldiers to jump out of the APC’s and set the armoured tanks on fire, without realising that he was being monitored. This was shocking because the terrorists were armed with weaponry which were grossly inferior to the firepower of the Nigerian Army Amoured tanks. After accomplishing the sabotage act, the Colonel and the junior officers and soldiers ran away into the bush, claiming that they were overpowered by a better armed group of Boko Haram terrorists,’’ Saturday Vanguard said.