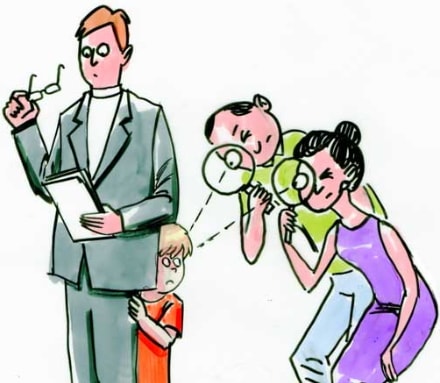 Sons and daughters of gospel ministers are having hard times living up to the expectations of their lineage owing to a combination of psychological and societal factors with damning consequences, reports Sunday Oguntola

Amos Ige (not real name) is naturally a likeable, transparent personality. But he hides his parents’ identity much more than his net worth. He would rather tell people his financial worth than reveal the true identity of his parents.

“It’s supposed to be an asset that I am a Pastor’s Kid (PK) but I am not proud to disclose that side of me. If there is anything I guard jealously, it is letting people know that my father and mother are pastors,” the Information and Communication Technology (ICT) expert states.

But he used to be so proud of that heritage until few years ago. “Growing up, I was so all over town telling everyone I am a PK. I received special privileges and preferences, especially within the Christian community,” he confirms.

It all changed for him in 2014. “I dated a lady in church and before you could say Jack, she became pregnant,” he recalls. All hell was let loose. The poster boy of the church suddenly became a leper. Nobody wanted to have anything to do with him again. His parents felt so let down they almost disowned him.

For the first time, the pressure of being a PK got at him. “I felt so disappointed with myself. I started thinking I didn’t deserve such wonderful parents. I felt literally like the Devil. Till date, I haven’t gotten over big let-down. It occurred to me that PKs are expected to be so above board that our mistakes are unpardonable,” Ige shares.

The feeling of living beyond pardons has taken Ige out of the church and left his relations with his parents strained. “We talk occasionally but things are never the same with us again. They felt I destroyed their testimony and credibility as ministers. That is never my intention at all. I didn’t wake up one day with that in mind.

“But even if I did, I think I should have been forgiven and pardoned. I find it odd we preach so much forgiveness but hardly extend it to others when they commit seemingly unpardonable sins,” Ige states.

According to him, there are so many PKs in his shoes because they are subjected to higher standards. “I know we should be examples but we can also falter and when we do, we shouldn’t be written off. It appears everyone expects a PK to be so holy and without blemishes that when we falter, we should be crucified.”

A PK, who simply identified herself simply as Beatrice recalled how she lived a troubled childhood because of her parents’ status. She said: “I grew up in a mission house with my parents always telling me I must be different from others. My church folks also pointed out when I make mistakes that I shouldn’t because my parents are pastors.

“When I fought, they say ‘a pastor’s child shouldn’t do that’. Whatever I did, I kept hearing the same thing. Everyone expected me to be so different and holy. Living under that kind of pressure killed me off. I ended up withdrawing to my shell and living a pretentious life.” Beatrice, a single mother, said the unrealistic expectations placed on pastors’ children make many of them turn out bad.

Beatrice left the church as soon as she was out of home. She ended up with a man who impregnated her before she returned to complete her tertiary education. “At a point, I just told myself I couldn’t live up to the holy standards of a pastor’s child. I gave up completely and chose a different path from my parents. The pressure on us is enormous and many are buckling under them,” she laments.

Marriage counsellor, Pastor Bisi Adewale, is worried with the trend of many PKs turning out bad. “It should call for concerns because it can be heartbreaking to have children working against what you stand for.”

Adewale attributes to the worrisome trend to poor parenting skills by most pastors. “You see parenting is a skill that must be learnt and practised consistently. Pastors’ children are not any different from others. They must be nurtured in the faith and trained well to take after their parents.

“But when parents don’t mirror good conducts or place undue pressure on them, they will certainly give in. Yes, the Devil works extra hard to fight their turning out well but I believe the buck of the challenge is on how they are brought up,” he states.

“There are so many religious activities we do that make our children associate Christianity with rituals. For example, most pastors force their children to wake up by 5am for morning devotion.

“Those kids will grow up resenting that practise because it deprives them of sleeping well. There is nowhere it is stated we cannot have devotions in the nights or afternoon.

“We impose church attendance on them too because we are pastors. There is the likelihood they will resent such imposition if we don’t attach benefits to them. We live in an age where children are resentful of impositions and religious rites. If we are not careful, we would lose them for life,” the graduate of psychology shares.

The founder of Good Heritage Ministry Abuja, Apostle Ekene Okon, urges pastors to live true to their callings, especially at home. “They have to be exemplary and model good conducts to the children. Once the kids spot any contradiction with what they preach and do, they will be tuned off.

“Besides, we must allow these kids to make mistakes and learn from them. I know it is tough but we should let people know pastors’ children can make mistakes and should not be condemned when they do. When we give the impression they are above mistakes, we are setting them up for a big fall,” he submits.

A teen minister, Korede Abolade, believes pastors’ children should be allowed to grow without undue pressure. “From my observation, many of them are already conditioned for a big fall. The church and their parents tell them to be so good without working on how to get that done. Many of them either pretend or grumble underneath. That is why they are so happy to leave home because they feel so choked,” she states.

Is The World Really About To Come To An End?
Nigerian Politics Now In The Grip Of Self Serving Political Nomads With No Vision Or Sense Of Direction