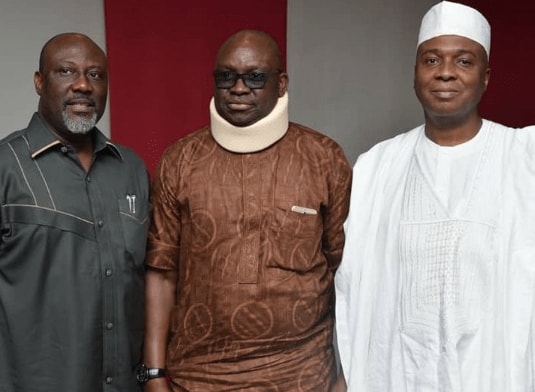 Nigerian politics is now in the grip of self-serving political nomads with no vision, sense of direction or the moral capacity to stand for anything but themselves

The chains of religious and ethnic bias, poor voter education and a weak party system has made the political landscape in Nigeria a circus, even in these times. There is a poor understanding of political structures by the electorates and politicians alike, leading to bad decision-making at the polls and equally bad governance by elected officials. Success at elections in the country is rooted in base electioneering and moral compromises that begin to manifest early on in every election season.

A wave of crossovers from one political party to the other is currently playing out all over the country and meetings have been held in anticipation of more moves in the very near future. The two major political parties in Nigeria have long been seen as two sides of the same coin, but the flagrancy of so-called “defections” and the fluidity of allegiances have made the distinction between the parties merely academic. Just before the 2015 elections, there were many defections from the then ruling People’s Democratic Party, PDP, to the All Progressives Congress, APC, which now holds power.

Last week, a group of APC members were reportedly in talks with PDP leadership about a possible move to the latter. Amongst the APC members were Senate President Bukola Saraki, Senator Barnabas Gemade and governors Abdulfatah Ahmed of Kwara, Samuel Ortom of Benue, and Aminu Tambuwal of Sokoto. Curiously, the set of politicians were amongst the list of defectors that joined the APC just before the 2015 elections. They belonged to a bloc within the PDP that had been called the New-PDP at the time, before their defection, and they now belong to a bloc within the APC that is called the Reformed-APC.

It all seems like business as usual in Nigerian politics, but the disruptive tendency of these politicians is a threat to the development of credible and strong political structures in the country and, ultimately, the advancement of the country from its “developing” state. It is also a disregard of their duty to the electorates, of creating real choices through the political platforms that the parties represent. It sows seeds of instability and shows intending investors that there is no ideological basis for political decision making – which makes long term business planning and projections almost impossible. Considering also that these men are widely travelled and well read, their shameless manoeuvres and attention seeking ways betray an unforgivable lack of patriotism and selfishness on their part, because they should know better.

There are theories of partisan profiling in politics, like the positioning theory, that have been applied to interactions between political associations and ideology in the developed world. The positioning theory particularly gave rise to terms such as the “right” and “left” wings of political thought and ideology, and these terms have been used to explain and understand the leanings of major political parties in any country or players within those political parties. This profiling helps in better decision making by electorates and more coherent manifestos by the political parties in developed countries.

Essentially, left wing political ideology is concerned with social equality and the neutralisation of social hierarchy, emphasising government intervention through welfarist and reformist agenda to achieve egalitarian objectives. Right wing political ideology on the other hand is more conservative in its outlook, especially about traditional social structures, emphasizing the principles of capitalism, as opposed to welfarism or socialism, and is, in essence, elitist.

Although these positions can overlap at different points, it creates a decent rubric for distinguishing political ideas and agenda. In the United Kingdom, of the two major political parties, the Conservative Party, or “Tories” as they are called, is considered more right wing while the Labour Party is more leftist in ideology and by consequence, policies. In America, the Republicans are the right wingers while the Democrats are considered to be more on the left of the political spectrum. Even with the overlaps, voters and investors in these countries have an idea of what to expect when a right wing or left wing party or candidate is in power.

Attempting to profile Nigerian political parties and politicians using the positioning theory or any other modern theory of partisan profiling will present problems. Our politicians are so devoid of vision and ideology that the political parties that they create are indistinguishable from the other. The real political ideology of Nigerian politicians and their parties is to win at all cost. This is why the major political parties may, for instance, publish leftist agendas in their manifestos on the campaign trail and enact right wing policies when elected. It is almost like attaining power for the sake of it with the only thought of perpetuating power once it is attained.

Only recently, before the last Anambra gubernatorial election did Nigerians see what ideological politics could look like, with the televised debate organized for candidates from different political parties in the state. It was a glimpse of what politics can be in Nigeria and one needs to credit the candidates for their courage to engage in the debate. Although it is difficult to say what impact it had on the final results, it is a sign of light at the end of the dark tunnel we now find ourselves in.

During the first republic, the political parties created then had vestiges of ideology that could differentiate the parties. Nnamdi Azikiwe’s National Council of Nigeria and the Cameroons, NCNC, was essentially nationalist and was perhaps the truly “all Nigeria” party, and by far the most liberal in its views. Obafemi Awolowo’s Action Group, AG, was welfarist in its outlook while the Northern People’s Congress, NPC, under the leadership of Ahmadu Bello was basically elitist. Even though the AG and NCNC were more progressive, the NPC and AG still exhibited similar traits in terms of their primary protection of (different) ethnic interests.

After the first “marriage of inconvenience” in the first republic between two parties with vastly different ideologies, the NCNC and the NPC, ideological politics was on the decline through the second and third republic until the present reality of zero ideology. Ethnic and religious issues that were in the background of the ideology of the first republic have burst out into prominence in our politics. Self-serving and parochial interests now employ these issues as tools of manipulation to drive sentiments and influence outcomes.

The region of the country with what can be described as the strongest political structure is southwest, which has been operating in line with the vision of Asiwaju Bola Ahmed Tinubu for many years. Although Tinubu’s Action Congress of Nigeria, ACN, has now been absorbed by APC, it does not seem like the political genius of Tinubu has developed a strong enough structure for APC to transcend the politics of filth and mismanagement that obtains at the centre.

Nigerian politics is now in the grip of self-serving political nomads with no vision, sense of direction or the moral capacity to stand for anything but themselves. Now that some of these nomads are set to migrate again, there is talk of a change of name for their next destination. A leopard cannot change its spots. The political landscape needs more ideological politics and not new names to describe old wrecks.

The starting point for a robust political presence is a clear and concise vision and discernable, unambiguous principles to guide the vision. Ideology is born when vision meets principles. Many of our politicians have no principles, or vision, or both. Political office is a matter of personal ambition to many and not about service or making positive difference, even though these are not mutually exclusive motivations.

The balance of power in Nigeria must shift away from strong and desperate men to the hands of intellectually astute and practical men and women. Nigerians must demand debates on policy and strategy from their candidates before elections. We must be satisfied that men that are going into office on our behalf understand the problems that face us all. Finally, we must understand our own problems and our own options so we can hold our representatives to account.

Continue Reading
You may also like...
Related Topics:nigerian, politicians, politics, self serving

Challenges Of Being A Pastor’s Kid: Travail & Personal Struggles Of Preachers’ Children
The Fall Of Ekiti Peter The Rock: How Fayose’s Needless Dramatics And Loudmouthed Fulminations Became His Undoing