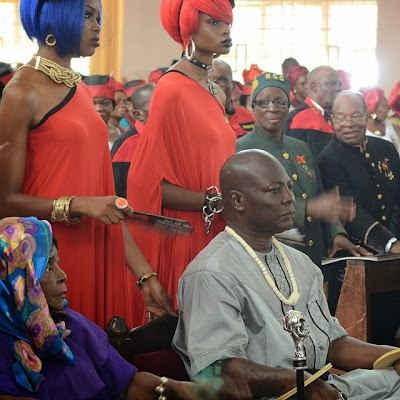 July 5, 2014 – Charly Boy: I Was Born Catholic Now A Buddhist,  I Left Christianity Bcos They Pray Too Much In Churches

Area fada turned attention seeker, Charles Oputa aka Charly Boy has revealed his religion and why he left Christianity.

In a recent interview with Vanguard, the Maverick entertainer said he was forced to go to church by his disciplinarian father. Charly Boy said he is now a Buddhist.

“First of all, I am not a church goer. I am a Buddhist, though I was born into the Catholic doctrine. And part of my reason for not going to church is the fact that I have been to a lot of churches. For the first 20 years of my life, I was a mass servant. I was an ‘altar boy’ because my father was a disciplinarian. If you don’t go to morning mass, you are bound to be in trouble. I did all that for 20 years, and that’s the kind of background I was coming from. But things have changed regarding the mode of worship in most churches. They spend more time than necessary. Why should we be praying for two to three hours non-stop? I have other things to do.”

According to Wikipedia, Buddhism is a non-theistic religion that encompasses a variety of traditions, beliefs and practices largely based on teachings attributed to Siddhartha Gautama, who is commonly known as the Buddha, meaning “the awakened one”. According to Buddhist tradition, the Buddha lived and taught in the eastern part of the Indian subcontinent sometime between the 6th and 4th centuries BCE. He is recognized by Buddhists as an awakened or enlightened teacher who shared his insights to help sentient beings end their suffering through the elimination of ignorance and craving by way of understanding and the seeing of dependent origination, with the ultimate goal of attainment of the sublime state of nirvana.

So he left Christianity because Christians pray too much…Hmmmm What an excuse??