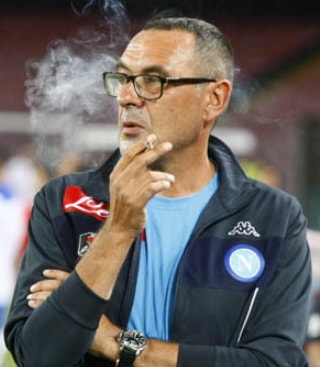 Chain smoker Maurizio Sarri, the new manager of Chelsea Football Club is famous for smoking up to 80 cigarettes a day during his time at Napoli.

Since he moved over to Chelsea, the 59-year-old will require a special smoking area during his match days.

Since smoking has been banned in workplaces in the UK, Chelsea will have to build a special smoking room to permit Sarri to light up at Stamford bridge.

According to the Mirror, Chelsea must find a way to build Sarri a smoking room so as to accommodate him as the club takes on Arsenal on August 18.

Due to his addiction to cigarette, his former club RB Leipzig built him a smoking room within the changing room ahead of their Europa League clash with Napoli last season.

Photos: Pastor David Adeoye & Sumbo Ajaba Baby Boy Naming Ceremony In West Haven, Connecticut
Lagos Prostitutes: What Married Men Tell Us About Their Wives & Why They Love To Patronize Us