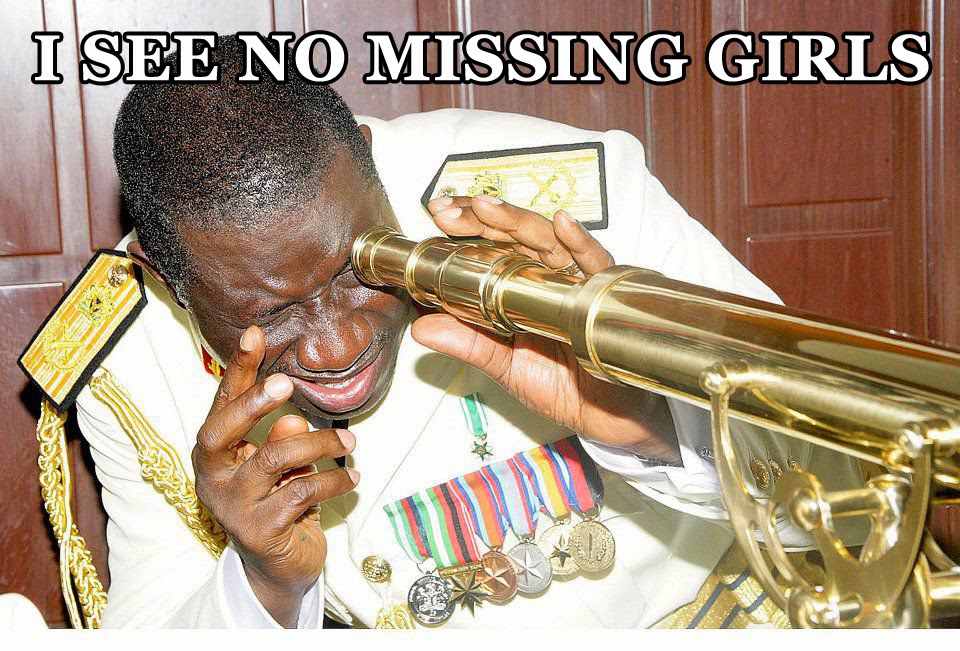 August 24, 2014 – Chibok Parents Give Up Hope On Missing Girls After Jonathan Gave Them Money

The blessed parents of Nigeria’s 234 abducted Chibok Angels have made the ultimate sacrifice to end Boko Haram terror in Nigeria and rescue the nation from the reign of the devil: Quoting their message to President Jonathan:

“Parents of the abducted Chibok girls have told President Jonathan and the Nigerian Army to go ahead and end Boko Haram, even if it endangers the lives of the girls. They said they are ready to turn their daughters into sacrificial lambs, if it will end insurgency and the terror that Boko Haram has being carrying out.”

The parents further said, “they have conducted the funeral rites of their abducted daughters and are waiting for their dead bodies to bury them.”

Over to President Goodluck Ebele Jonathan, lobatan? Oya, you can now immediately proceed.

Nigeria’s president through his many spokesmen, Reuben Abati, Doyin Okupe and the rest, have repeatedly claimed that it was so as not to risk the lives of the girls that they had for the past 130 days of the abduction been unable to raid Sambisa forest to decimate Boko Haram.

I recently told the President of Nigeria through his high commissioner at the 100 days of abduction candle-light vigil in New York, that the excuse of now leaving Boko Haram to continue its deadly devastation of the north and continuous abductions from safety within the forest was untenable, illogical, reckless and frankly evil. “They are dead already, they are no better than dead… that is no excuse, go and defeat Boko Haram now,” I told him, and “rescue them living-dead or alive.”

In a prayer article published on August 19th, “Why Abducted Chibok Girls Will Rescue Nigeria – Dr. Peregrino Brimah;” I referenced an Islamic Hadith and the Biblical scripture of Psalm 10: 8-18. Permit me to present these again, because I see the Good Lord in His Ominipotent ways answering the prayers of the oppressed girls in miraculous ways only He can and we could never predict:

Psalm 10: (NET Bible) 8 He waits in ambush near the villages; in hidden places he kills the innocent. His eyes look for some unfortunate victim. 9 He lies in ambush in a hidden place, like a lion in a thicket; he lies in ambush, waiting to catch the oppressed; he catches the oppressed by pulling in his net. 10 His victims are crushed and beaten down; they are trapped in his sturdy nets. 11 He says to himself, “God overlooks it; he does not pay attention; he never notices.” 12 Rise up, Lord! O God, strike him down! Do not forget the oppressed! 13 Why does the wicked man reject God? He says to himself, “You will not hold me accountable.” 14 You have taken notice, for you always see one who inflicts pain and suffering. The unfortunate victim entrusts his cause to you; you deliver the fatherless. 15 Break the arm of the wicked and evil man! Hold him accountable for his wicked deeds, which he thought you would not discover. 16 The Lord rules forever! The nations are driven out of his land. 17 Lord, you have heard the request of the oppressed; you make them feel secure because you listen to their prayer. 18 You defend the fatherless and oppressed, so that mere mortals may no longer terrorize them.

I also referenced the Hadith of Prophet Mohammed (p) of Islam which stated: “Fear the prayer of the oppressed, even if he is a disbeliever, for there is no barrier (between it and Allah [the God]).” (Al-Bukhari and Muslim)

Yes, the Lord has heard the prayers of the oppressed, raped and permanently harmed Chibok girls. The lord has granted Nigeria a miracle that will prove the liars, sack the oppressors and deliver the abducted girls from their endless entrapment under meaningless protected terror.

What Will Jonathan’s Next Excuse To Protect Boko Haram, “His Siblings” Be?

Will the President of Nigeria now go ahead and send the army to decimate Boko Haram? What excuse will he and his couriers now give to the Chibok parents, to Nigerians and the world as to why they are soft on Boko Haram?

Suddenly the abduction of 234 girls presented the Nigerian government an excuse to defend their “kid-glove” approach to Boko Haram; unlike the predecessor government of late Umar Yar’Adua who swiftly decimated the first appearance of a similar formation in the north with the extra-judicial killing of its leader, no mercy, no sympathy, no dilly-dally.

We know the truth – that the president of Nigeria has always been sympathetic and supportive of the Boko Haram cause; long before this most recent abduction. In August of 2012, the Christian Association of Nigeria, CAN told Goodluck Jonathan to resign for his statement that he was soft on Boko Haram because they are “his siblings” and “he could not send the army to wipeout his siblings.”

“They (Boko Haram) are our siblings and you cannot send the army to wipe out your family…. We are handling them with a soft approach.”

In reaction to this, Nigeria went in uproar. The notorious Femi Fani-Kayode commented, “He is a weak, cowardly, sad and confused man.” [Facebook, August 13, 2012]

Quoting my earlier presentation of this criticized peculiarity of the Nigerian President: The Christian Association of Nigeria, CAN, got so upset they asked for the president to resign; they said, “Jonathan has failed us Christians, he has failed Nigerians and he should resign because by this statement, it is very clear that he is not capable of handling the danger pose by the Boko Haram insurgency.” Further reacting, “So the security agents who are being killed by the Boko Haram are not members of this family?” and also querying why Jonathan was opposed to the designation of Boko Haram as a terrorist organization as demanded by most Nigerians.

Is The Army Cowardly? If The Army Is Cowardly, We Are Not

We civilian patriots have demanded for “Executive Authorization for the Right To Bear Arms To defend Ourselves in Borno and Accost and Sack Boko Haram” since April 26th in an official letter written to the President of Nigeria [ Ref: https://ends.ng/?p=864]. In Iraq, immediately the ISIS crisis started, the then Prime Minister Nouri al-Maliki (who responsibly resigned realizing he could not handle the crisis), immediately called on volunteer civilians and enabled the arming of 1.5 million who answered the call. These patriot civilians checked the advance of the deadly terrorists. Nigeria’s president has refused to answer our call made by civil rights organizations like ENDS.ng, Borno representatives, Borno hunters and vigilante’s and Borno Pastors. Why is the president protecting Boko Haram? If the army cannot protect the people, the people should never be denied the right to protect themselves. We were and are ready to storm Sambisa. All we need is the approval of Mr. President.

The President of Nigeria presents as many excuses as he can for his tolerance and protection of Boko Haram terrorist organization, decimating northern farming villages. It is reported that the continuous persistence of Boko Haram terror allows the diversions of billions, 1/4th the national budget set aside for the ‘war on terror’ to be plundered. Can this be the reason why the Nigerian military indirectly transfers Nigeria’s APCs and armored tanks and other weapons to Boko Haram to use to continue to decimate the northern farming villages? And why the Nigerian airforce does not bomb Boko Haram in these vehicles when they drive to and from villages they destroy? The time for this is over. The President’s last excuse for treating Boko Haram as his siblings just crashed through the floor. The Chibok parents (may the Good Lord bless them) have made the ultimate sacrifice for Nigeria: they have told the President to go ahead – massacre Boko Haram even if it means martyring their daughters in the process. May their prayers be accepted. May the prayers of the Chibok Angels be accepted. May the wicked be disgraced. May the prayers of Nigerians be accepted. May this event be the end of all forms of unthinkable oppression that Nigerians face. Amen. Please say Ameen. God is working in mysterious ways.

*“Lobatan” is a Nigerian slang that means – is it not finished.