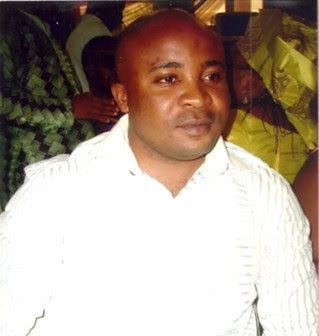 A 38-year-old business man who has a shop in Alaba Lagos has died.

The popular businessman and an importer of musical equipment at Alaba International Market, Ojo area of Lagos State, southwest Nigeria, was hacked to death in his house by two suspected armed robbers.

Mr. Chidi Ejimudo, 38, was hacked to death at midnight recently in his apartment at Lion Gate, Isashi area of Ojo.

How the assailants gained entrance into the building is still a mystery.

P.M.NEWS gathered that Ejimudo was hacked 19 times on the head and chest and he died before he could be rushed to the hospital.

He was brutally killed in the presence of his wife, Vivian Ejimudo and the house girl, Tochi Obi, 13.

The autopsy carried out on the deceased by Dr. U.V. Okeke of the Department of Pathology and Forensic, Lagos University Teaching Hospital, LASUTH, revealed that Chidi had 19 deep cuts on his body, disruption of the lungs and heart and a sharp force trauma, which led to his death.

Considering the manner he was murdered, members of Ejimudo’s family have suspected that the killers of their brother were in the apartment long before they went to bed that night.

They said they suspect that the murder of their brother was planned by insiders, adding that the house consists of six rooms and a fierce dog guards the compound at night.

Senior brother of Chidi, Chief John Ejimudo, wondered why the dog was locked up in the security house the night the attack was carried out.

He said if the dog was not locked up it could have easily overpowered the murderers who were not armed with guns.

According to him, “I was in my house sleeping when I heard a knock around 2.30 a.m. and I inquired who was there and my brother’s wife, Vivian, shouted from outside that my brother has been attacked by two men with cutlasses and that they injured him.

“ I asked her why she didn’t call me on phone but she said the battery on her phone was flat.

“I rushed to the house and right from the staircase, I saw blood everywhere. When I got to his room, I saw him lying on the ground drenched in his blood and I turned him round, called his name and he did not answer. We rushed him to a private hospital in the area where I was told that he was already dead.”

John said the matter was reported at the Isashi Police Station, but that the police were too slow in carrying out investigation of the murder.

He said the case was transferred to the State Criminal Investigation Department, SCID, Panti, adding that while the house girl was initially detained, the father of Vivian, Ezinwa Okonkwo, took Vivian away to his house.

According to him, when Assistant Superintendent of Police, ASP, Bola from SCID came to the house with his men “and saw that the doors or burglary proof were not broken and that the dog was locked up in the cage when the attack took place, he suspected that the killers may have been hiding inside the house before the family went to bed that night and that the killing may be the work of an insider.”

John said that was when Vivian, his brother’s wife, was arrested as the prime suspect by the police along with the house girl and were taken to Panti.

Vivian was released two days later after she got sureties to facilitate her bail. John said: “we suspect that our brother was murdered by an insider. We wonder why his wife did not shout for help when the killers came into the house as they were not holding guns or even assist him fight for his life.”

The house girl, Tochi, gave a vivid account of how her master was hacked to death with a machete by the assailants.

According to her, she was sleeping in her room that night when she heard some people talking in hushed tone behind her room inside the house.

“They entered my room and I saw them holding long knife, the type used by butchers. They woke me up and warned me not to shout. They asked me how many people lived in the house and I told them three people and they asked me who was sleeping with my master and I said his wife.

“They asked me to go and knock at their door and tell my master that I had stomach problem and I went there and knocked. My master inquired from inside what the problem was and I told him I had serious stomach problem and he opened the door and saw me with a man with a machete, while the other one was hiding by the door.

“My master tried to close the door and lock it back but the man with me was using the cutlass to cut his hand. That was when the second man came to help his colleague and they started to machete him while I ran into the room and saw my master’s wife by the wardrobe,” she explained.

Tochi added: “They were asking for money and my master said he had no money and they took his phones and kicked him with their shoes. My mistress begged them to allow her go into the neighbourhood to get some money for them but they refused. They asked her for gold and they took what she had and slapped her. They told my mistress that she should come and visit them at a place I could not remember in case she wanted to see them, before they went away.”

When P.M.NEWS visited Isashi Police Station, the Divisional Police Officer, DPO, who was in mufti refused to comment on the issue, saying he had no such powers to do so. Our correspondent could not also reach Vivian, the wife of the deceased, for comment as she had been taken away by her father.