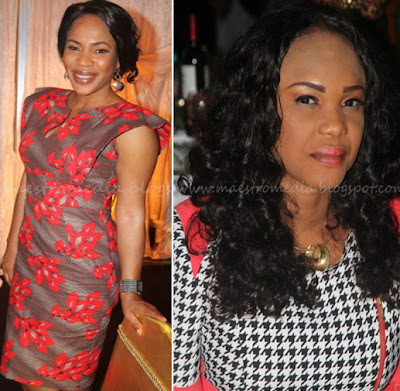 On Monday the 8th of July, 2013 during the wedding ceremony of Nollywood actress Toyin Aimakhu, we learnt two Yoruba movie stars, Fathia Balogun and Iyabo Ojo engaged in a physical fight over a not-so-important issue.

According to people who witnessed the messy fight, Iyabo Ojo addressed Fathia Balogun without adding the usual ‘aunty‘.

Though she used to call her aunty but sources say they are not sure what came over her that day.

To cut the long story short, Iyabo Ojo upsets Fathia Balogun who in turn engaged her in a hot exchange of words that led to a physical fight.

“warn Iyabo o. Am I her mate? If she comes near me I will slap her,” – said Fathia Balogun

If not for the quick intervention of the wedding guests, the two ladies would have caused a scene on Toyin’s special day.

Come to think of it, is adding ‘Aunty’ to someone’s name a sign of respect ?.

What if I call you aunty and deep down, am out of respect for you?

Do you think Fathia Balogun should have just keep quiet?

Who is to be blamed? the ‘rude’ actress or the one who is forcefully demanding to be called aunty?