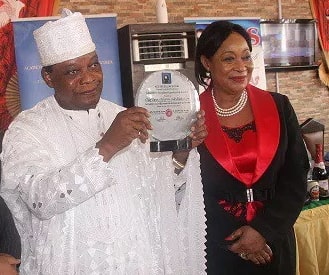 Okogwu Sunny, the elder brother of late Maryam Babangida gave up the ghost on Monday at his home in Asaba Delta state after a short time battle with liver disease.

He was born on the 20th of March 1931 in Calabar Cross Rivers state.

Okogwu was crowned the Ide Ahaba of Asaba few years ago.

Considered the richest Insurance broker in the country, he founded Robert Dyson Diket Insurance Brokerage Firm  in the 80s before he ventured into media business.

He was the publisher of now-defunct Post Express Newspapers.

The deceased is survived by his beautiful wife Theresa Okogwu and 9 grown children.