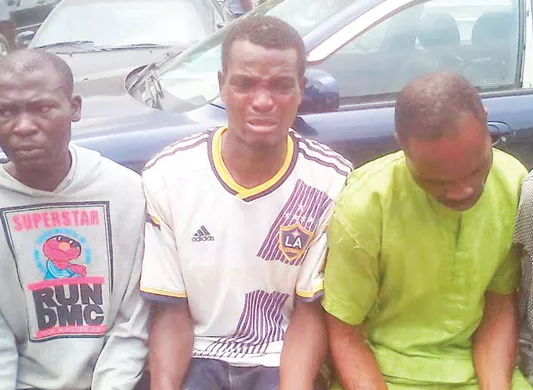 The suspects, 27-year-old Emmanuel Okemayi , 30-year-old Austin Anyia and 32-year-old Awosola Adewale, told the police that they decided to kidnap the woman, who is their boss, because she was wicked and did not take care of them very well.

The state Commissioner of Police, Imohimi Edgal, who paraded the suspects at the command headquarters, Ikeja, said Okemayi, Anyia and Adewale had concluded arrangement to kidnap the businesswoman, Ijeoma Eze-Okafor, before the FSARS operatives were directed to infiltrate them.

“On October 19, about 8p.m., the suspects requested for arms, ammunition and vehicle from the FSARS agents while the suspects sent photographs of the target, details of her vehicle and other information to the FSARS team.

“Unknown to the suspects, they were dealing with policemen. It took the suspects 10 days to plan the kidnapping. However, on D Day, October 29, the suspects surfaced and were immediately arrested.”

During interrogation, it was revealed that two of the suspects were both employed as drivers to the victim and victim’s husband respectively.

Edgal said the third suspect, Adewale, had collected N10,000 from the drivers to enable him hire a native doctor who would protect them after the operation.
He added:

“The suspects said the plan to kidnap their employer was as a result of her wickedness and her attitude towards them.”